Rwigara’s mother and sister were also detained on tax evasion charges, while she is also being charged with forgery, police said in a Twitter post on Sunday.

The three women, who were arrested on Saturday, can be held for up to five days while authorities decide whether to press charges.

In early September, Rwigara was also detained by police on tax evasion and forgery charges.

Rwigara was a women’s rights activist before she announced plans to seek Rwanda’s presidency in last month’s election.

Two days after declaring her candidacy, nude photographs allegedly of her were leaked on social media. It was not clear who was behind the leak.

Rwanda’s electoral board eventually disqualified her, saying she did not have enough signatures to support her candidacy.

Kagame later won that election with 98 percent of the vote to secure a third term.

Rwigara’s brother, Aristide, told the Associated Press news agency that his sister is being persecuted for having dared to challenge Kagame in the August 4 election.

He also said the criminal allegations against the family are fabricated, insisting they have been targeted by Rwanda‘s government for refusing to do business with the ruling party.

“These charges are absurd. Every day, authorities in Kigali come up with something new against my family,” Aristide said, speaking from the United States. 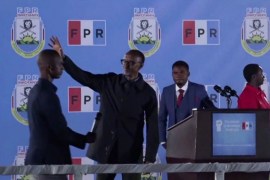 Did a climate of fear keep Paul Kagame in power?

Rwandan president gets a third term with 99 percent of the vote, extending his 17-year rule.