Iran has halted flights to airports in the autonomous Kurdish region in northern Iraq at the request of the central government in Baghdad a day before a Kurdish independence referendum, the semi-official Fars news agency reported.

The agency quoted Kayvan Khosravi, spokesman for Iran’s top security body, as saying on Sunday that Iran was also closing its airspace to flights originating in the Kurdish region.

The announcement came as Iran also started military exercises at the Kurdish border.

The air embargo is the first concrete retaliatory measure against Monday’s referendum which is rejected by the government in Baghdad and by Iraq’s powerful neighbours – Iran and Turkey – as well as Western powers, including the US.

“They are more disappointed with the international community’s reaction opposing the vote,” Abdel Hamid said.

The shutdown will affect two airports in the Kurdish area: in Erbil and Sulaymaniyah.

Abdel Hamid said that despite the air blockade, the land border between Iran and Iraq’s Kurdish region remains open.

The Kurdish region is one of Iran’s largest trading partner with about $4bn in trade every year.

Tehran and Ankara fear the spread of separatism within its own Kurdish areas.

On Saturday, the Turkish parliament approved the extension of a mandate allowing the deployment of troops in Iraq and Syria.

A report by Mehr News quoted Khosravi as saying the Kurdish Regional Government’s (KRG) “hasty decisions” to go ahead with the referendum would bring the security of the Kurdish people, Iraq and the region “under serious threat”.

KRG President Massoud Barzani has said there is no stopping Monday’s referendum despite international opposition, adding that the vote is non-binding. 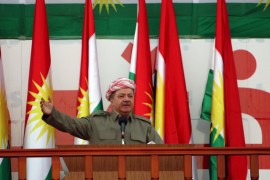