Trump called the North Korean leader a “madman” on Friday, a day after Kim dubbed him a “mentally deranged US dotard” who would face the “highest level of hardline countermeasure in history” in retaliation for the US president saying Washington would “totally destroy” the Asian country if it threatened the US or its allies.

“We have to calm down the hot heads,” Lavrov told reporters at the United Nations on Friday, where world leaders gathered this week for the body’s annual General Assembly.

“We continue to strive for the reasonable and not the emotional approach … of the kindergarten fight between children.”

On Thursday, North Korea’s Foreign Minister Ri Yong-ho warned that Kim could consider a hydrogen bomb test of an unprecedented scale over the Pacific.

Ri, who is due to speak to the UN on Saturday, added that he did not know Kim’s exact thoughts.

In response, US Secretary of State Rex Tillerson said Washington’s diplomatic efforts would continue but all military options were still on the table.

For its part, China, North Korea’s neighbour and only major ally, responded by calling on all parties to exercise restraint.

“For now, it is a war of words but diplomats increasingly fear the heightened rhetoric, coupled with any miscalculations, could lead to actual conflict,” Al Jazeera’s James Bays, reporting from the UN headquarters in New York, said.

Graham Ong-Webb, a research fellow at the S Rajaratnam School of International Studies in Singapore, said that a prospect of a major international conflict seemed to be down to two men “on opposite sides of a fence” slinging insults and threats at each other.

“What we need to do is deflate the issue and really get down to the table and encouraging parties to start talking,” he told Al Jazeera from Singapore.

“Because if we do not do so, we are just going to drive ourselves against a wall and head towards conflict.”

North Korea’s six nuclear tests to date have all been underground, and experts say an atmospheric test, which would be the first since one by China in 1980, would be proof of the success of its weapons programme.

In a rare statement directly attributed to North Korea’s leader, Kim said Trump is “unfit to hold the prerogative of supreme command of a country”.

He described the US president as “a rogue and a gangster fond of playing with fire”.

Trump on Friday tweeted: “Kim Jong-un of North Korea, who is obviously a madman who doesn’t mind starving or killing his people, will be tested like never before”.

The White House said on Friday that Trump and South Korean President Moon Jae-in had agreed to Seoul’s “acquisition and development of highly advanced military assets” and to increased deployment of US strategic assets in and around South Korea on a rotational basis”. It did not name specific weapons systems.

On Thursday, Trump announced new US sanctions that he said allows the targeting of companies and institutions that finance and facilitate trade with North Korea. Then when asked if diplomacy was still possible, he said: “Why not?”

The additional sanctions on Pyongyang, including on its shipping and trade networks, showed Trump was giving more time for economic pressure to weigh on North Korea. US Treasury Secretary Steven Mnuchin said banks doing business in North Korea would not be allowed to operate in the US.

KCNA said Chinese media was “openly resorting to interference in the internal affairs of another country” and driving a wedge between the two countries.

The rhetoric has started to rattle some in other countries. French Sports Minister Laura Flessel said France’s team would not travel to the 2018 Winter Olympic Games in South Korea if its security could not be guaranteed.

The 2018 Games are to be staged in Pyeongchang, just 80km from the demilitarised zone between North and South Korea, the world’s most heavily armed border. 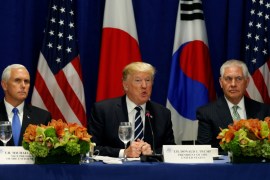 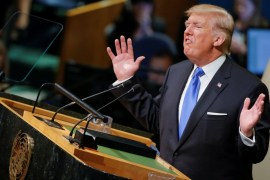