Workers have cut out part of a new statue to honour Mikhail Kalashnikov, inventor of the Soviet Union’s AK-47 assault rifle, after locals discovered that it mistakenly depicted a German firearm of World War II.

The removal happened just three days after the monument was unveiled with much fanfare in the capital, Moscow.

A metal bas-relief behind a statue of Kalashnikov depicts the AK-47 and other weapons all supposedly designed by the engineer, who died in 2013.

REPORTER’S NOTEBOOK: In praise of the AK-47 – Russia unveils statue of Mikhail Kalashnikov

But on Friday, embarrassed sculptor Salavat Shcherbakov had to admit that among them was the Sturmgewehr 44 (StG 44) assault rifle used by Nazi troops at the end of World War II.

“We will rectify this,” Shcherbakov said in comments broadcast by state-run Rossiya 24 channel. “It looks like this (mistake) sneaked in from the internet.”

By Friday evening, a square hole gaped where the German rifle had been depicted in the bas-relief.

Kalashnikov’s weapon does have a striking resemblance to German arms designer Hugo Schmeisser’s StG 44 rifle, created in 1942, although they have major design differences.

Kalashnikov was known to have said he had heard speculation that he had copied the German rifle.

Vladislav Kononov, executive director of the Russian Military and Historical Society, was cited by Russian media as saying that the fact that angry Russians had spotted the error in the relief disproved that. Many had earlier vented their disapproval on social media.

“Every cloud has its silver lining – thanks to this mistake … a myth has been destroyed that Kalashnikov borrowed some elements of his invention from his foreign colleagues,” he said.

Kalashnikov designed “Avtomat Kalashnikova”, which became the standard issue rifle of the Soviet army, in 1947 – hence the abbreviation AK-47.

Today, it is the most commonly used assault rifle in the world, widely perceived as a highly reliable and sturdy weapon.

Every fifth firearm in the world is a Kalashnikov, with more than 70 million of the assault rifles produced over the past 60 years, the Kalashnikov Concern manufacturer said on its website.

Kalashnikovs are in service in 50 foreign armies, it added. 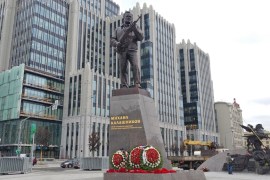 In praise of the AK-47: Russia unveils statue of Mikhail Kalashnikov

Russia celebrates the assault rifle inventor with a dedicated monument in the capital, Moscow.