Mexico’s search-and-rescue operation is focusing on 10 buildings where authorities hope to find survivors from Tuesday’s 7.1 earthquake.

At least 273 people died, and 2,000 people were injured when buildings collapsed due to the tremors; about 50 people have been pulled out alive from under the rubble so far.

The majority of deaths, 137, were in Mexico City.

By Thursday, news of the miraculous rescue of a schoolgirl trapped in the rubble of a school in the Mexican capital had become a symbol of hope.

WATCH: Mexico City was better prepared for earthquake than it was in 1985

“We want to emphasise that we have no knowledge about the report that emerged with the name of a girl,” Angel Enrique Sarmiento, navy’s assistant secretary, said on Thursday.

“We never had any knowledge about that report, and we do not believe – we are sure – it was not a reality.”

In fact, he said, the only trace rescuers had were images from a camera lowered into the rubble of the Enrique Rebsamen School that showed blood tracks where an injured person apparently dragged him or herself.

Sarmiento said the only person still listed as missing was a school employee.

Several dead people have been removed from the rubble of the school, and it could have been their fingers rescuers thought they saw move.

“The information existing at this moment doesn’t allow us to say if it is an adult or a child,” Sarmiento said.

“As long as there is the slightest possibility of someone alive, we will continue to search with the same energy.”

Alfredo Padilla, a volunteer rescuer at the school, played down the importance of the revelation that there was no trapped child.

“It was a confusion,” Padilla said. “The important thing is there are signs of life, and we are working on that.”

In retrospect, the story of “Frida Sofia,” had some suspicious elements from the start.

Officials could not locate any relatives of the missing girl, and no girl with that name attended the school.

“We have done an accounting with school officials, and we are certain that all the children either died, unfortunately, are in hospitals or are safe at their homes,” Sarmiento said.

He said 11 children had been rescued and 19 had died, along with six adults, including a school employee whose body was recovered just before dawn on Thursday.

Al Jazeera’s Heidi Zhou-Castro, reporting from Mexico City, said that rescue operations were still under way, mostly focused on 10 buildings in the city.

“With each passing hour, the hope of finding survivors grows more desperate, the work more grim,” she said.

Mexico City’s government said about 60 people had been pulled out alive from under the rubble.

Manuel Luna, a family member of a missing person, told Al Jazeera: “They’ve started to use heavy machinery because supposedly there’s no one else left alive.”

Luis Felipe Puente, the federal civil defence director, acknowledged that backhoes and bulldozers were starting to clear away some wrecked buildings where no one had been detected or where teetering piles of rubble threatened to collapse on neighbouring structures.

“It is false that we are demolishing structures where there could be survivors,” Puente said. “The rescue operations will continue, and they won’t stop.” 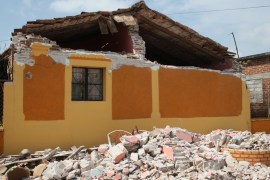 As death toll climbs to 90, residents of town hit by the 8.1-temblor say authorities reacted too slowly to their plight. 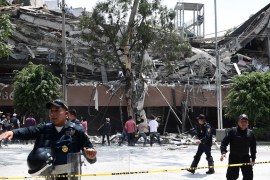 At least 22 children from one school among those killed in the deadliest tremor to hit the country in 30 years.