Speaking to Al Jazeera’s UpFront programme, Odinga said he was the winner of the elections, and the results were “just manipulated”.

“What the [Supreme] court did was the right thing,” he added, referring to the Kenyan Supreme Court’s decision to nullify the election results and call fresh elections, based on irregularities in the voting process.

“In 2007, he was with me. He was in the front line fighting against the rigging of the election,” he added.

“Mr Ruto lives in denial. Because he himself has witnessed election rigging first hand.”

Odinga was also asked to comment on international observers, like Ghanaian President John Mahama, who initially stated that the elections were credible.

“President John Mahama did not disclose that he had a conflict of interest,” said Odinga. “He’s a friend of President Uhuru Kenyatta.”

Responding to concerns that there would be increased violence and protests if he lost the repeat elections, Odinga said: “We are not people who want to see violence on the streets.”

“If I lose elections fairly, I will accept and tell my supporters we lost fairly,” he said.

Kenya’s election commission announced on Thursday that the repeat vote would be held on October 26. 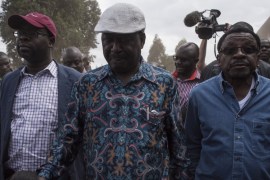