Hurricane Maria, the second major hurricane to hit the Caribbean this month, has struck the US territory of Puerto Rico, flooding streets, damaging buildings and bringing down telecommunication towers and power lines.

Leaving at least nine people dead in its wake across the region, Maria blew ashore in the morning in the southeast coastal town of Yabucoa as a Category 4 storm with winds of 250km per hour (km/h).

It was expected to buffet Puerto Rico, home to about 3.4 million people, with strong winds for 12 to 24 hours.

Rivers burst their banks, and the winds downed trees and damaged homes and buildings, including several hospitals, according to local news media.

Electricity was out across the island on Wednesday, El Nuevo Dia newspaper said, while thousands of people were seeking safety in shelters.

“Maria is threatening to bring 750mm of rain to some parts of the mountainous island, so there is a high risk of flash floods and landslides,” said Al Jazeera’s meteorologist Steff Gaulter, referring to the most powerful storm to hit Puerto Rico in almost 90 years.

“It’s expected to weaken as it crosses Puerto Rico, but then strengthen again as it moves over the sea once more.

“It’s going to get very close to Hispaniola, Turks and Caicos and Bahamas. A slight wobble and any of these places could get a direct hit.

“But even without a direct hit, there are still likely to be damaging winds, flooding rains and a significant storm surge of up to three metres.”

Puerto Rico is grappling with the largest municipal debt crisis in US history, with both its government and the public utility having filed for bankruptcy protection amid disputes with creditors.

“This time, power could be out for months,” he said.

“This is an island with huge debt, about $75bn. The electricity company, which has a monopoly here, has about $9bn worth of debt. Its grid is very weak, and most of the plants are twice the age of the industry standard

“Repairing and getting power back to the 3.4 million people who live on this island is going to be a very long and painful process.”

Maria killed at least seven people on the island of Dominica, government officials said, and two people in the French territory of Guadeloupe. It also caused widespread damage on St. Croix, one of the US Virgin Islands.

Hurricane Irma, which ranked as one of the most powerful Atlantic storms on record, also left a trail of destruction in several Caribbean islands and the US state of Florida this month, killing at least 84 people in the Caribbean and the US mainland.

“God is with us; we are stronger than any hurricane,” Governor Ricardo Rossello said on Twitter on Wednesday. “Together we will rise again.”

Even though Irma grazed the north of Puerto Rico and did not hit the island directly, it knocked out power for 70 percent of the island and killed at least three people.

Maria was set to be the strongest hurricane to hit Puerto Rico since 1928 when the San Felipe Segundo hurricane slammed the island and killed about 300 people, the National Weather Service said.

Before hitting Puerto Rico, Maria destroyed roofs and brought down trees as it passed west of St Croix, home to about half of the US Virgin Islands’ 103,000 residents, as a rare Category 5 storm, the top of the five-step Saffir-Simpson scale.

Some 65 to 70 percent of the buildings on St Croix were damaged by the storm, said Holland Redfield, who served six terms in the US Virgin Islands senate.

In Guadeloupe, at least two people were killed, according to France’s minister for overseas territories.

Many roads were blocked and some 80,000 people, or 40 percent of the population, were without power, the overseas territories ministry said in a statement.

In the largest city, Point-a-Pitre, there was flooding of more than three feet in parts of the city, access to the port was blocked, and a hospital was damaged, it said.

The island of Dominica, with a population of about 73,000, was devastated by Maria earlier in the week.

Housing was significantly damaged or destroyed, and there was no electricity, phone service or running water, Henry said. 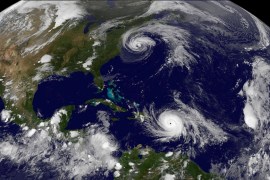 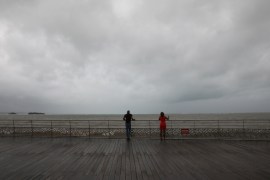