Martin Schulz, the former president of the European Parliament, is used to winning elections.

After a long, successful career in politics, Schulz decided to resign his post in Brussels in November 2016 and return to his native Germany to contest the chancellorship in this year’s federal election, to be held on Sunday.

Recent polling suggests the Schulz-led Social Democratic Party (SPD) will win 22 percent of the vote, 14 percent less than Angela Merkel – who is running for a fourth consecutive term as chancellor – and her Christian Democratic Union (CDU) party.

It appears Schulz will suffer a heavy defeat, a result that looked unlikely for much of the last six months.

In March, Schulz was appointed leader of the SPD, winning a historic 100 percent of the votes cast at a party conference in Berlin.

For Schulz, 61, the vote marked the latest victory in a political life defined by beating opponents in ballots.

Born in 1955 in Hehlrath, a village in western Germany close to its Dutch and Belgian borders, Schulz has described his younger self as being “really lazy at school”. And then, “as a young man, [having] nothing but soccer in my head”.

After leaving school, Schulz struggled with alcoholism for a number of years, and in 1980 attempted to end his life. Within two years, aged 27, he opened a bookshop in the nearby town of Wurselen, and his personal life changed for the better.

His political career had started almost a decade before. Schulz joined SPD at 19 and went on to become his region’s youngest-ever mayor at 31.

Eight years later, in 1994, Schulz was elected as a member of the European Parliament, where he worked for more than two decades.

He has spoken proudly of his time in Brussels, which ended in January this year, saying, “The EU is a unique project that replaced war with peace, hate with solidarity.”

Having turned his attention back to Germany and the chancellorship, Schulz initially enjoyed a surge in popularity.

Early polls placed him ahead of Merkel, encouraging German news agencies to suggest a “Schulz effect” had gripped the electorate.

Combining a manifesto centred on the theme of social justice – including pledges to raise the top rate of tax from 43 to 45 percent and invest heavily in education – with Schulz’ personable approach seemed to be placing the party in line for success this September.

“There was finally a sense of real debate and not just the same old, same old.”

In recent weeks, however, Schulz’ surge appears to have stalled. SPD has found itself stuck in the low 20s in opinion polls since the beginning of September.

Part of the problem, said Lau, is that Schulz has not built on the early momentum he enjoyed and has been unable to articulate the positive sense many Germans feel about the current state of their nation.

“He was all about how Germany is miserable in many ways… There was no [focus on] the future and joy,” she said. “We are a very well off country… Many people feel it’s the best Germany that we have ever lived in.”

SPD’s coalition with Merkel’s CDU in the last parliament has also given Schulz a difficult political obstacle to overcome. Criticising a government that his party belonged to has not always appeared easy during the campaign, or effective.

He’s struggled to outflank Merkel, said Lau, and whether he tries to on the party’s usual platform of the left, or by moving right, “either way he loses”.

On key issues such as immigration, he’s attempted to challenge Merkel by suggesting she put Germany in danger with her open-door policy on refugees, but Schulz has had to be wary of alienating traditional SPD voters while trying to attract new ones, said Lau.

“He began as a giant but then in the course of his campaign [it] continuously lost grandeur.”

Because of Germany’s consensual political system, Sunday’s vote will likely mark the beginning of new negotiations aimed at forming a parliamentary coalition, as opposed to a conclusion.

However, Schulz’ future as leader of his party may well hinge on the vote, said Lau.

“If the SPD sink below 20 percent [of the vote] they will definitely be in opposition. If they are that low, then they won’t form a coalition with Merkel again… They’ll want to renew themselves in opposition.”

“He [Schulz] would like to carry on leading, even in opposition, but I’m not sure the party would let him. If you lose an election like that you haven’t proven you’re the best person to be in charge,” Lau said.

Campaigning on Thursday in the western German city of Cologne, Schulz told supporters to get out and vote, and he brushed aside the negative poll figures.

“I do not fight for any pollsters. I also do not fight for figures. I fight for our conviction and for our principles. We fight for you, for the people in this country,” said Schulz. “We fight for more justice in Germany so that the next generation has a good future and for a strong and united Europe.” 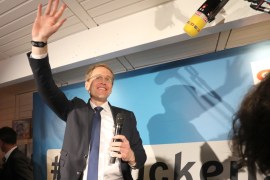 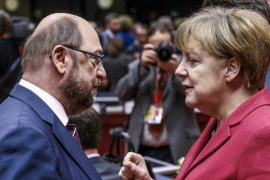