Police in Myanmar have clashed with a mob blocking an aid shipment in Rakhine state while nine people have died in a road accident involving a Red Cross truck in Bangladesh.

A 300-strong mob of Buddhist protesters in Rakhine’s capital Sittwe gathered late on Wednesday at a jetty where a boat carrying relief goods was preparing to travel upriver to Maungdaw, Reuters news agency said.

The mob forced the ICRC (International Committee of the Red Cross) to unload the aid from the boat and prevented the vessel from leaving, state-backed Global New Light of Myanmar newspaper reported on Thursday, quoting Myanmar’s Information Committee.

Police officers arrived as the crowd neared the jetty, while Buddhist monks tried to calm the mob, but people began to hurl “stones and Molotov [cocktails] at the riot police,” the report said.

Eight people were detained, and several police were injured before order was restored.

The ICRC confirmed the incident and said it would continue to try and deliver relief to the area.

“We will carry on; nothing has been put on hold,” Graziella Leite Piccoli, ICRC spokeswoman for Asia, told AFP news agency.

Communal tensions remain high across Rakhine where raids by Rohingya fighters at the end of last month prompted a major army crackdown, driving more than 420,000 people into Bangladesh in what the UN calls a campaign of “ethnic cleansing”.

Aid groups fear that tens of thousands trapped in Rakhine are desperate for support, even though humanitarian access remains difficult despite the government’s promise to allow safe passage.

The crisis has prompted condemnation of the country’s de-facto leader, Aung San Suu Kyi, for refusing to blame Myanmar’s powerful military for the crackdown, which French President Emmanuel Macron said amounted to “genocide”.

News of the clashes in Rakhine, where security forces have been accused of razing scores of Rohingya villages, emerged as a truck hired by the Red Cross and ICRC crashed in Bangladesh, killing nine people and injuring 10 others.

“It was carrying food to Rohingya refugees on the border, including those stranded in the no-man’s land,” Yasir Arafat, deputy police chief of Bandarban border district, told AFP.

Hundreds of thousands of Rohingya refugees have streamed into Bangladesh since the end of August, crowding into ill-equipped camps and makeshift shelters near the border town of Cox’s Bazar.

Aid groups have been overwhelmed by the scope of the influx and warned of an unfolding humanitarian crisis in the camps, where they are struggling to build housing and provide food rations.

The Bangladesh government is building a massive new camp nearby to shelter 400,000 people, but the UN says it will take time before it is equipped with tents, toilets and medical facilities.

Myanmar’s government has come under fire by global leaders urging the country to address the crisis and condemn the military for attacks on the Rohingya, who are widely reviled as “Bengali” immigrants in Myanmar.

But Myanmar, which has been accused of playing down the violence, insists the crisis is easing.

“I am happy to inform you that the situation has improved,” Henry Van Thio, Myanmar’s second vice president, told the UN General Assembly on Wednesday.

He said there have been no clashes since September 5 and added that his government was committed to allowing aid in.

“Humanitarian assistance is our first priority. We are committed to ensuring that aid is received by all those in need, without discrimination,” he said.

There were more than one million Rohingya in Myanmar before the current crisis, though nearly half have fled since deadly attacks on military posts by Arakan Rohingya Salvation Army (ARSA) fighters on August 25 prompted a massive military retaliation.

They have long been ostracised in Myanmar, where they are considered “illegal immigrants” and face severe restrictions. 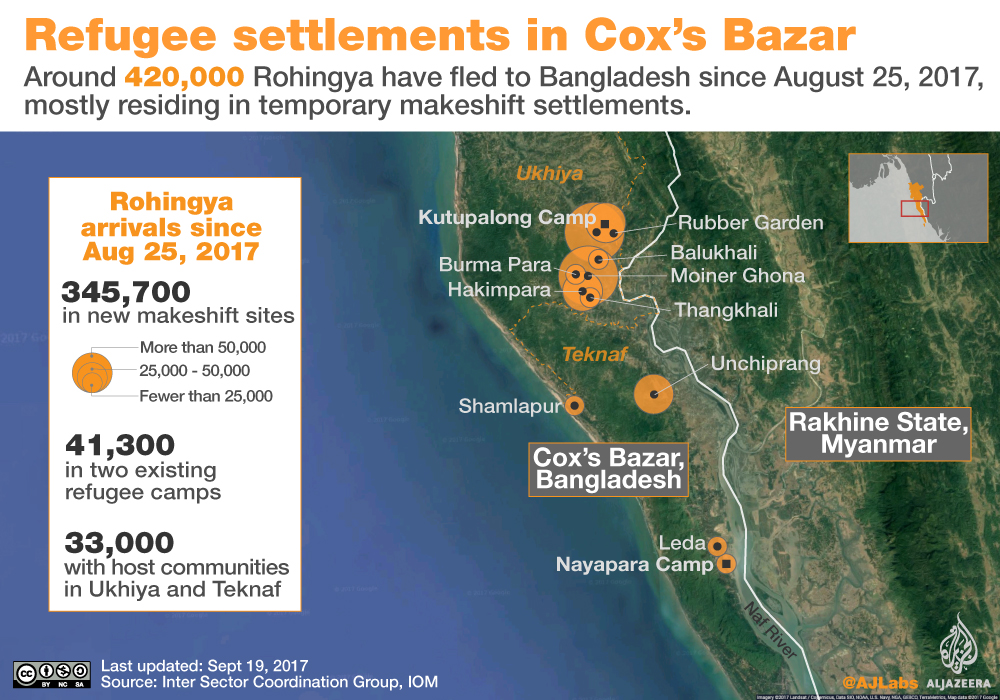