The eye of the hurricane, which has already killed two people in the Caribbean, made landfall near Emajagua, in the southeast of the main island, inflicting potentially catastrophic damage to the island.

The eye wall had earlier grazed the southwest of the island of St Croix, in the US Virgin Islands, when the system was still a Category 5 hurricane.

The storm is expected to bring a surge of up to three metres and as much as 750mm of rain to Puerto Rico.

This would lead to flash flooding and bring the risk of landslides across the mountainous island.

Maria strengthened after hitting Dominica on Tuesday, bringing sustained winds of 280km per hour (kph). To be classed as a Category 5 system, on the 5-point Saffir-Simpson scale, the winds have to be over 252kph.

“Very violent and intense right now as we have just begun to experience hurricane force winds,” said 31-year-old Coral Megahy late on Tuesday, as she hunkered down on St Croix.

“We can hear debris banging on the aluminium windows, as well, right now.”

On St John Island, locals told AFP news agency that trees were swirling in the wind and rain was coming “sideways” as Maria continued on its path of destruction.

Hurricane Maria was pounding the Caribbean just two weeks after Hurricane Irma started its onslaught of the Leeward Islands.

Following so closely behind Irma, there is the risk that debris left by Irma could be turned into dangerous projectiles.

St Martin, a French-Dutch island that was among the worst hit by Irma, was under a maximum “violet” alert as Maria crossed the region, with people ordered to stay indoors.

Fortunately, Maria was a relatively small storm and its eye passed over 200km to the south of the island. St Martin was therefore spared a repeat of the devastation caused by Irma.

READ MORE: Irma – Gone but never to be forgotten

Instead, it was the island of Dominica which felt the full force of the hurricane. Premier Roosevelt Skerrit posted on Facebook that there were initial reports of “widespread devastation,” with official communications to the island completely cut off in the wake of the storm.

The airport and ports are also inoperable.

The eye of Maria then brushed the French island of Guadeloupe, claiming two victims and leaving two more people missing.

As the storm churned away from the island, it reintensified and grew in size.

As the cyclone bore down on St Croix, hurricane force winds (winds above 119kph) extended 95km from the centre of the storm.

Puerto Rico measures only about 180km in length, so a direct hit by the storm would ensure that much of the island would experience highly destructive winds.

On Puerto Rico, Governor Ricardo Rossello described Maria as “the worst storm of the last century”.

Although Hurricane Irma didn’t make landfall on the Puerto Rico, it is estimated to have caused damage of up to $1bn as it skirted across the north of the main island.

After striking the island of Puerto Rico, Maria is expected to head northwards, staying to the east of the Bahamas. 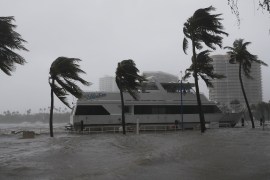 Life-threatening storm surges expected in the US state as Irma smacks Naples as a Category 2 hurricane. 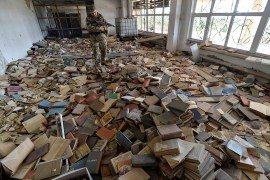