Hurricane Maria has grown into a maximum-strength Category 5 storm, US forecasters said, as it made landfall on the island of Dominica.

The “potentially catastrophic” hurricane had top winds of 257kph as it touched down around 01:15 GMT in Dominica, the US-based National Hurricane Center (NHC) said.

Dominica, a heavily forested former British colony that is home to 72,000 people, lies in the eastern Caribbean about halfway between the French islands of Guadeloupe to the north and Martinique to the south.

Maria is the fourth major Atlantic hurricane of the year, and forecasters warn it is on a likely collision course with the US territory of Puerto Rico.

The governor of Puerto Rico, Ricardo Rossello, urged island residents in a social media advisory to brace for the storm’s arrival, saying: “It is time to seek refuge with a family member, friend or head to a state shelter.”

If it continues on its current path, it is expected to hit the US territory by Wednesday.

Puerto Rico narrowly avoided a direct hit two weeks ago from Hurricane Irma, which reached a rare Category 5 status and ranked as the most powerful Atlantic storm on record before devastating several smaller islands, including the US Virgin Islands of St Thomas and St John.

Residents of some islands fled in advance of the storm.

Beth Tamplin Jones, 45, rode out Hurricane Irma earlier this month in the pantry of a friend’s house in the US Virgin Islands.

“It was so intense,” said Jones, who evacuated from St John to Puerto Rico last week and then caught a flight to Atlanta, where she planned to remain until Maria passed.

“We’re in hurricane alley, so we’ve had other storms, but nothing like this,” Jones told Reuters news agency, referring to Irma, which killed more than 80 people in the Caribbean and the US mainland.

“I don’t think anybody’s ever been hit by a storm like that. To see another one coming is just so discouraging.”

US Virgin Islands Governor Kenneth Mapp warned residents not to underestimate the threat from Maria, or its potential to change track. “Just remember this is a live animal,” he said.

Maria was expected to whip up storm surges – seawater driven ashore by wind – of up to 2.7m above normal tide levels, the NHC said.

Parts of Puerto Rico could see up to 64cm of rain, it added.

Hurricane and tropical storm warnings and watches were in effect for a string of islands in the area, including the US and British Virgin Islands, Antigua and Barbuda and the French-Dutch island of Saint Martin.

Puerto Rico opened shelters and began to dismantle construction cranes that could be vulnerable to Maria’s high winds.

Forecasters were also tracking Category 1 Hurricane Jose, packing 120km/h winds and located about 405km east of North Carolina and stirring dangerous surf and rip currents to much of the US Eastern seaboard.

Maria marks the 13th named Atlantic storm of the year, the seventh hurricane so far this season and the fourth major hurricane – defined as Category 3 or higher – following Harvey, Irma and Jose, the NHC said.

Those numbers are all slightly above average for a typical season, which is only about half over for 2017. 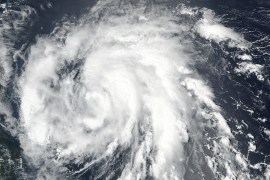 A strengthening storm is swirling towards the eastern Caribbean along a path similar to deadly Hurricane Irma. 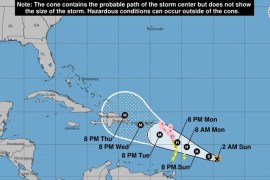 Tropical Storm Maria strengthens in the Atlantic and threatens to bring more misery to the Leeward Islands.