At least 25 people have been killed in a series of clashes between armed groups over one week in escalating violence in the Central African Republic (CAR).

The UN said on Tuesday that thousands of people continue to be uprooted and forced to flee for their lives in resurgent fighting between rival factions in various parts of the country.

In its weekly report released on Tuesday, the UN Office for the Coordination of Humanitarian Affairs (OCHA) said that preliminary estimates indicate at least 10 people were killed and 50 others wounded in fighting between rival factions in the central town of Bria between September 7-8.

In Yokapi, a village in the country’s east, around 15 people were killed and some 80 houses torched in a violent confrontation between two communities, OCHA added.

OCHA’s reported death toll is in addition to at least six people killed since last Thursday in Batangafo, a northwestern town where more than 28,000 are without aid, according to several humanitarian sources.

If tensions continue to escalate, the UN warns, the country could fall into larger-scale conflict.

The UN’s comments come days after human rights group Amnesty International warned that civilians in central areas of the country were enduring “a horrifying surge in torture, pillage and forced displacement”.

On Wednesday, Lewis Mudge, a researcher with the Africa Division of Human Rights Watch, told Al Jazeera that “armed groups are more emboldened than ever to kill civilians, rape women and girls and destroy property. Displacement camps, places that are usually protected, are under attack”.

“There are two main reasons for this uptick in violence: impunity for past crimes and a peacekeeping mission that is overstretched,” Lewis said.

The CAR, a former French colony, fell into a protracted political crisis in 2013 after President Francois Bozize was overthrown by a coalition of Muslim-majority rebel groups called the Seleka, who in turn were driven from power.

Muslims were shunned, forced to flee into enclaves and displaced persons camps or neighbouring countries.

Amnesty International warned of “a Muslim exodus of historic proportions”.

In June 2016, President Faustin-Archange Touadera was voted in.

Though a semblance of security has returned to the capital, Bangui, the countryside remains under the control of armed groups while UN peacekeepers battle to protect civilians caught in the middle.

At least half of the country’s population currently depends on humanitarian aid.

Since January 2017, the number of displaced people has grown from 400,000 to 600,000 according to the country’s international NGO coordination committee.

Humanitarian organisations have struggled to cope amid the spread of violence. During the first half of 2017, NGO workers suffered more than 200 attacks.

“UN Security Council should ensure that [the UN peacekeeping mission] has all the resources required to stem rising violence across the country,” said Mudge of HRW. 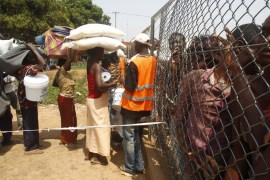 ‘Around 100 killed’ in CAR’s Bria despite truce deal 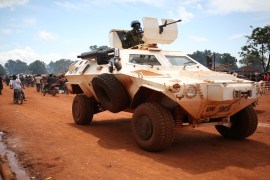