Hurricane Irma has come and gone. Meanwhile, Jose is still lurking in the western Atlantic, bringing heavy seas to the Eastern Seaboard of the United States.

As if that were not enough, we now have a new tropical system heading towards the same area that was flattened by Irma.

Tropical Storm Maria has developed in the Atlantic Ocean and is currently located around 800km east-southeast of the Lesser Antilles. The storm currently has sustained winds of around 85 kilometres per hour but it is expected to reach hurricane strength by 00:00GMT on Monday.

A tropical storm watch is in effect across the Windward Islands from Barbados and the Grenadines northwards. Of even greater concern is the fact that a hurricane watch has had to be issued across the islands to the northeast of Caribbean.

Current projections suggest that Maria could pass very close to Dominica around 00:00GMT on Tuesday. The Leeward Islands further north are all at risk and that does, of course, include what is left of Barbuda, along with Anguilla, Antigua, through St Kitts and Nevis, all the way south to Monserrat.

Maria is likely to become a hurricane by the end of Sunday and could be packing winds of around 170 gusting 200km/h. That would make it a Category 2 storm on the Saffir-Simpson scale.

One positive development is that the storm is moving quickly with a westward movement of 26km/h. That will push it across the Leewards quickly, however, further strengthening is possible with the storm heading towards Puerto Rico as a major Category 3 storm.

By landfall, the winds could be approaching 200km/h with gusts nearer 240km/h. Hispaniola can expect to feel some effect by the end of the week.

All the usual treats apply with damaging winds, a 2 to 3-metre storm surge, flooding rains and life-threatening mudslides. As ever, there is some uncertainty over the exact path of this next devastating storm, but regardless of that, many areas still struggling to recover from Hurricane Irma are going to be affected yet again. 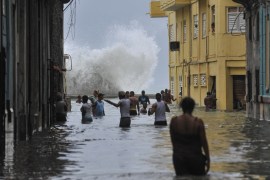 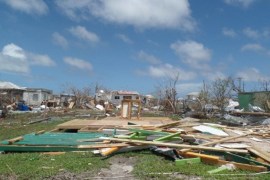 This cyclone refuses to die and continues to bring the threat of bad weather to island nations in the western Atlantic.