A Pakistani official says a roadside bomb has killed a senior tribal government administrator and four tribal police near the Afghan border.

Fawad Ali, the assistant administrator, was travelling with police to attend a meeting when their vehicle was struck by the device in the town of Mamoond, some 25km from Khar, the main town of Bajaur on Sunday.

Anwarul Haq, another tribal official, says the device was detonated remotely, and that a search for the perpetrators is under way.

Al Jazeera’s Kamal Hyder, reporting from Lahore, said the police believe the attack was aimed to target the official.

“The official along with his five police guards were hit by the explosion that happened along close to the Afghan border,” he said.

“Pakistan is blaming some of the Pakistan banned groups based across Afghanistan for carrying out these deadly attacks.”

The Pakistan Taliban, also known as Tehreek e-Taliban, claimed responsibility for the attack.

Armed groups have long operated in the tribal region along the Afghan border, where they attack security forces and those seen as cooperating with the central government.

In June, twin bombings killed at least 67 people and wounded more than 200 in the northwestern Pakistani city of Parachinar’s Toori Bazar.

On the same day, a suicide bombing claimed by the Jamaat-ur-Ahrar, a faction of the Pakistan Taliban, killed at least 14 people at a police checkpoint in Quetta in Balochistan province.

At least 10 of the victims were police officers, bringing the overall death toll from three separate attacks across the country to 85. 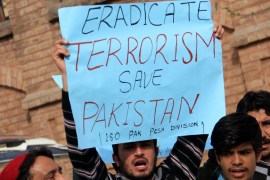