Hamas has agreed to talks with the rival Fatah movement and expressed its willingness to hold general elections in the Palestinian territories.

In a statement issued on Sunday, Hamas said it has accepted key conditions set by President Mahmoud Abbas and dissolved the Gaza administrative committee, a body viewed by Abbas’ Palestinian Authority (PA) as a parallel government.

Hamas has run Gaza since 2007, when it forced troops loyal to Abbas from the coastal enclave a year after defeating his Fatah movement in parliamentary elections.

Since then, the Palestinian leadership has been divided between two rival governments, with Hamas controlling Gaza and Abbas in charge of autonomous enclaves in the Israeli-occupied West Bank.

Repeated attempts at reconciliation between the two factions have failed in the past.

In its Sunday statement, Hamas invited a unity government led by Abbas to return to Gaza and said it was ready to enter talks with Fatah.

The unity government was formed in 2014, but has not been able to operate in Gaza.

“Hamas invites the consensus government to come to Gaza to practise its mission and carry out its duties in the Gaza Strip immediately, and it accepts holding the general elections,” the statement by Hamas said.

Fatah has welcomed the new pledges, but said it wants to see vows implemented before making the next move.

Nabil Shaath, an adviser to Abbas, told Al Jazeera that Fatah was “very optimistic” and “ready”.

“Once the consensus government … starts ruling Gaza and the West Bank, starts developing economically and starts solving the economic problems of the Gazans, that first step will set real optimism for the second step, which is elections,” he told Al Jazeera from Ramallah.

“Legislative and presidential elections will bring back our elected government,” he said.

Hamas’ decision came after separate talks by Hamas and Fatah delegations with Egyptian officials in Cairo in recent days.

The movement said it was “responding to the generous Egyptian efforts, which reflect the Egyptian desire to end the split and achieve reconciliation, and based on our desire to achieve national unity”.

Egypt has been brokering talks with Fatah to implement a deal signed in 2011 in Cairo with Hamas to end their dispute and form an interim government before elections.

Al Jazeera’s Harry Fawcett, reporting from West Jerusalem, said Hamas’ change in stance was “hinged on a new relationship between Hamas and Egypt” after the group “disassociated itself, in not so many words, from the Muslim Brotherhood”.

The Muslim Brotherhood government, which assumed power in Egypt following a 2012 election, was overthrown by the military the following year. The group has since been banned in the country.

Hamas has been weakened by an Israeli and Egyptian blockade, three wars with Israel and international isolation.

In March, Abbas stepped up pressure on Hamas after it formed the contentious committee that runs Gaza. Punishing measures included cutting salaries of employees living in Gaza and reducing electricity supply to the strip.

Hamas said it formed the committee after the unity government failed to take responsibility for Gaza’s administration.

Political analyst Khalil Shaheen said Hamas’ step to dissolve the committee was “inevitable in light of the pressure from Fatah and all the other factions within the Palestinian Liberation Organisation (PLO)”.

“Hamas was isolated after it formed this committee. The pressure from Abbas against Gaza increased the already dire political and economic conditions in the Strip,” Shaheen told Al Jazeera.

However, dissolving the committee, said Shaheen, “does not mean that Hamas’ is giving up control over the PA’s institutions in Gaza”.

Despite Sunday’s announcement, any reconciliation deal would still face many obstacles.

In previous deals, including the 2011 Egyptian-brokered agreement, both sides professed a willingness to reconcile, but ultimately baulked at giving up power in their respective territories.

A key sticking point in the past was Hamas’ refusal to place its security forces in Gaza under the control of Abbas’ government.

The Gaza Strip, an enclave of some two million people, has faced deteriorating humanitarian conditions, with a severe electricity crisis and a lack of clean water, among other issues.

Gaza’s economy is in tatters and it has one of the world’s highest unemployment rates.

UN officials have urged Israel to lift its decade-long blockade of Gaza. 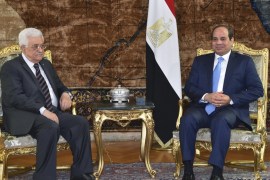 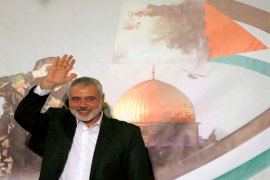 Hamas leader heads to Cairo to discuss ‘mechanisms to ease Gaza’s siege’, in first such visit since his election in May.