New York City – The annual United Nations confab of world leaders in September usually starts with a push on some lofty goal, such as tackling poverty or climate change.

That is not on the cards for the first UN General Assembly (UNGA) for United States President Donald Trump.

Instead, the focus on Monday will be the dour topic of UN reform – part of Washington’s drive to cut some flab off the world body and reduce the multi-billion dollar price tag it pays each year to keep the blue flag flying in midtown Manhattan.

Trump has previously written off the UN as a “club” for “people to have a good time”, prompting fears that tightening purse strings would leave needy people in South Sudan, Congo, and other hotspots without aid and blue-helmet backup.

Though UN reform is the centrepiece, delegates will inevitably get side-tracked by more urgent headaches: the ethnic cleansing of Rohingya in Myanmar, North Korean nuclear arms, and the rift between Qatar and its Arab neighbours.

All the while, paparazzi will hunt Trump and his counterparts from France, Emmanuel Macron, and Turkey, Recep Tayyip Erdogan.

Every eye-roll will be captured, not least when Palestinian President Mahmoud Abbas and Israeli Prime Minister Benjamin Netanyahu share the room.

“Will it be a Trump who wants to engage the UN and talk about issues that can be solved together, or a Trump who’s confrontational and critical?” Smith said to Al Jazeera.

UN insiders are mindful of Trump’s diplo-gaffes so far.

At NATO talks in May, he shoved past Montenegro’s Prime Minister Dusko Markovic to reach a photo-op.

In July, he famously breached protocol by letting his daughter, Ivanka, take his chair at a meeting of G20 world leaders in Hamburg, Germany.

A gruelling marathon of agenda-driven 15-minute sit-downs with presidents and princes does not suit free-wheelers like Trump.

Washington’s UN ambassador, Nikki Haley, said pressure from the Trump administration was already ushering in a “new day” as the world body is kicked into gear.

Nowadays “it’s not just about talking, it’s about action”, she said.

She may be delivering results. This month, Haley got a sceptical Russia and China to sign off on the toughest sanctions yet against North Korea; and cut $600m from the UN’s peacekeeping budget in June, reducing US dues by 7.5 percent.

Haley said 120 countries have signed on to US plans to streamline the UN’s clunky 72-year-old bureaucracy.

Guterres, a former prime minister of Portugal, is on board. He said he seeks a “constructive relationship” with Washington – the biggest UN contributor, which covers 22 percent of its core $5.4bn budget and 28.5 percent of the $7.3bn peacekeeping budget.

In the run up to talks, Guterres spoke of his reform efforts since becoming UN chief in January – a new mediation panel to pre-empt costly wars, a gender parity drive and a 15 percent cut in aircraft costs in blue-helmet missions.

“We cannot afford to misspend $1 when all the dollars are necessary,” he told reporters.

This may not be enough for Trump, who wants severe cuts to general and peacekeeping budgets, management reforms and an overhaul of the Human Rights Council, which is derided for letting the likes of Venezuela and Saudi Arabia act as watchmen.

The US has not proposed a target budget cut but has also not promised to maintain its current levels of funding.

For Alterman, it is not yet clear whether the US-UN budget dance will result in “cutting fat or muscle”, he told Al Jazeera.

Stewart Patrick, a scholar at the Council on Foreign Relations think-tank, predicted fireworks.

“Expect Trump to accuse the UN of ingratitude for US generosity and make future US financial contributions contingent on whether other nations support US priorities: ending North Korea’s nuclear programme, fighting terrorism, and keeping Iran’s feet to the fire,” Patrick told Al Jazeera.

Talks may end with a whimper, rather than a bang. UN parleys habitually digress into 193-way conversations where all countries trumpet pet causes and play to a home crowd. Outcome deals are often the lowest common denominator.

For example, the UN Security Council still reflects the geopolitics of 1945, when heavyweight spots were awarded to the US, China, Russia, France and Britain. There has been much talk of reform these seven decades since, but little action.

“UN reform is an old game trotted out whenever Americans get fed up with throwing money down the UN drain. President Trump seems to have taken the bait, and we’re gearing up to bankroll another UN-led reform of the unreformable,” Touro College professor Anne Bayefsky told Al Jazeera.

But, as Haley said, envoys are not “short on topics” to quarrel over. On Monday evening, Trump will dine with Latin American leaders to discuss the protests against Venezuelan President Nicolas Maduro, which have claimed at least 125 lives.

Qatar’s Emir Sheikh Tamim bin Hamad Al Thani will address the assembly and meet Trump on Tuesday in a bid to rally global support in the wake of Saudi and other US-aligned Arab states severing trade and diplomatic links in June.

North Korea’s nuclear weapons programme will be a hot topic, not least because of a ballistic missile test on Friday. Regional powerbrokers Vladimir Putin and Xi Jinping, the presidents of Russia and China respectively, will not be in New York City to take part.

Another high-profile absentee is Myanmar’s leader Aung San Suu Kyi. She cancelled her trip at the last minute while battling mounting criticism over the systematic killings and displacements of the Muslim-majority ethnic Rohingya in the western Rakhine state.

The political jamboree continues outside. Although police irk New Yorkers by cutting off traffic along First Avenue, there is still space for activists to shout from the sidelines. Among them is Josef Mohamed, 29, a tour bus driver from Alexandria, Egypt, wearing a Pharaonic costume.

“He’s a criminal; he killed a lot of people. The military don’t know about human rights and democracy. Egypt is going worse and worse.” 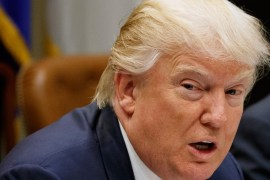 Pentagon set to be major winner while state department and federal programmes in for steep reductions.