Bangladesh has restricted the movement of Rohingya refugees, banning them from leaving designated areas in the country to which over 400,000 have fled from violence in neighbouring Myanmar.

Police said on Saturday that they have issued an order prohibiting Rohingya refugees from leaving the areas and camps the government has designated for them in the border district.

“They should stay in the designated camps until they return to their country,” Sahely Ferdous, a police spokeswoman, said in a statement.

She said Rohingya were also asked not to take shelter in the homes of their friends or acquaintances and locals have been asked not to rent houses to the refugees.

“They cannot travel from one place to another by roads, railways or waterways,” the order said, adding that bus and truck drivers and workers have been asked not to carry the Rohingya.

Police said they have set up check posts and surveillance in key transit points to make sure the refugees do not travel to the other parts of the country.

According to the state-run news agency, new camps were also being set up to help house the influx of refugees.

The restrictions were announced as Bangladesh authorities said they faced an “unprecedented crisis” due to the influx of 409,000 refugees since last month, according to UN figures.

Dozens of refugees were found in three towns hundreds of kilometres from the Myanmar frontier, stoking fears that thousands of the majority-Muslim Rohingya will move from the border region into the mainland of Bangladesh.

Conditions were already worsening in Bangladesh’s southeastern border district of Cox’s Bazar where the majority of refugees are living in squalid conditions after fleeing Myanmar’s violence-wracked Rakhine State.

On Sunday, many refugees huddled inside tents as steady ran fell.

“There’s a chaotic situation in relief operations,” he said, adding that the Bangladesh government is under criticism for not better organising the relief distribution system.

Most Rohingya, who spent more than a week trekking cross-country from Rakhine to reach the Bangladesh border, have found existing camps overflowing and have instead settled on muddy roadsides.

Many families do not have a shelter over their heads and refugees have been fighting for food and water deliveries.

Jamila Khatun, a Rohingya refugee, outside the giant Balukali camp told AFP news agency that she handed over her jewellery to a Bangladesh boatman two days ago to get across the river frontier from Myanmar.

“We walked by night for three or four days to avoid the military and then came over by boat,” she said.

“We don’t know what we will do or where we will live but if people here feed us we will stay. We don’t want to go back.”

Bangladesh has been overwhelmed by the arrival of Rohingya refugees – the highest number to have entered the country in decades – since the violence erupted last month. There were already 300,000 Rohingya in makeshift camps from earlier waves of refugees before the latest influx.

The mostly Muslim minority, who live primarily in Rakhine State, is not recognised as an ethnic group in Myanmar, despite having lived there for generations. Rohingya have been denied citizenship and are stateless.

READ MORE: My name is Muhammed Ason, I am Rohingya

Bangladesh’s Prime Minister Sheikh Hasina, who visited the refugee camps earlier this week, departed for New York City on Saturday to plead for international help and demand more pressure on Myanmar during talks at the UN General Assembly.

“She will seek immediate cessation of violence in Rakhine State in Myanmar and ask the UN secretary-general to send a fact-finding mission to Rakhine,” a spokesman for the prime minister, Nazrul Islam, told AFP.

Bangladesh has been criticised for turning back hundreds of Rohingya refugees at its border with Myanmar, as well as not providing enough aid to the refugees.

The government has put the army in charge of ferrying foreign relief aid from airports to Cox’s Bazar.

It also plans to build 14,000 shelters, which it hopes will be enough for 400,000 people. Each shelter can house six refugee families.

As tensions mount between the neighbours, Foreign Minister AH Mahmood Ali said Bangladesh “will continue international pressure on the Myanmar government to immediately end its ongoing ethnic cleansing of the Rohingya”.

The foreign ministry on Friday summoned the Myanmar charge d’affaires in Dhaka to protest at alleged violations of its airspace by Myanmar drones and helicopter.

The Bangladesh government earlier protested to the embassy over reports that Myanmar was planting landmines near their border, which have killed several Rohingya, and the treatment of the refugees.

Mahmood has also called the violence in Rakhine “a genocide“. 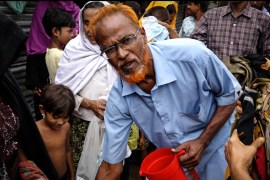 A farmer, a techie: The Bangladeshis helping Rohingya

Bangladeshi citizens have rallied together to provide much-needed food and shelter to Rohingya refugees. 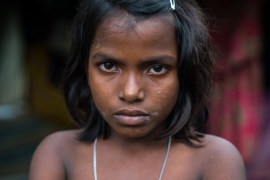 Message to the world from Noor Kajol, a Rohingya

“I would like the world to help us get our own country back or offer us another country that we could live in.”