Twelve Yemeni civilians including women and children have been killed in an air raid by the Saudi-led coalition northeast of the capital Sanaa, an official, residents and rebel media said.

The attack, which residents said claimed the lives of four children and two women, hit a vehicle in the Hareeb al-Qarameesh district, about 70km from Sanaa, the capital, on Saturday.

All the passengers were killed in the raid, reported Saba news agency, which is run by Houthi rebels.

Hareeb al-Qarameesh is controlled by the Iranian-backed Houthis, who have held control over Sanaa and northwestern parts of Yemen for the past three years.

The Saudi-headed coalition, which supports Yemen’s internationally recognised government, has been at war with the Houthis since March 2015.

The coalition has been repeatedly criticised for attacking civilians during the conflict.

More than 10,000 people have been killed and more than 40,000 injured since the outbreak of the conflict, according to the UN.

A cholera outbreak has also claimed the lives of more than 1,800 people since April, with 400,000 suspected cases across the country, according to the UN and the International Committee of the Red Cross.

The UN has warned that fighting in Yemen has pushed the country to the brink of famine, with 80 percent of the country’s children desperately in need of aid, posing the “largest humanitarian crisis in the world”. 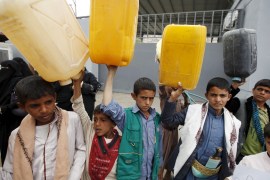 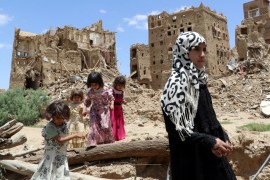 Rights group says air raids over two months killed dozens, including children, where there were no military targets. 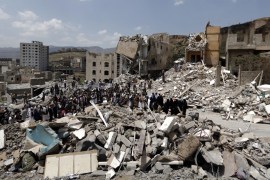