Hundreds of protesters have poured into the streets of the US city of St Louis over the acquittal of a white former police officer who shot and killed a black man in 2011.

A Missouri judge ruled on Friday that Jason Stockley, a white former police officer, was not guilty of murder in the shooting of 24-year-old Anthony Lamar Smith, a black man.

Stockley had been arrested in 2016 and was accused of planting a gun in Smith’s car, but testified he acted in self-defence.

After the verdict, about 600 protesters marched in downtown St Louis chanting “No justice, no peace, no racist police.”

Witnesses and video showed police using pepper spray on some protesters, while police accused some demonstrators of throwing rocks and water bottles and destroying police and public property.

At 13 least people were arrested.

Ahead of the acquittal, activists had threatened civil disobedience if Stockley were not convicted, including possible efforts to shut down highways.

Barricades went up last month around police headquarters, the court building where the trial was held and other potential protest sites. Protesters were on the march within hours of the decision.

The judge who decided the matter declared that he would not be swayed by “partisan interests, public clamour or fear of criticism”.

Protests in St. Louis are heating up. Police have been using pepper spray and have stated they no longer consider it a peaceful protest. pic.twitter.com/5TUftFXggA

Stockley, who was charged with first-degree murder, insisted he saw Smith holding a gun and felt he was in imminent danger during the incident in December 2011.

At Stockley’s direction, the driver of the police car slammed into Smith’s vehicle and they came to a stop, court documents said. Stockley then approached Smith’s car.

Assistant Circuit Attorney Robert Steele emphasised during the trial that police dashcam video of the chase captured Stockley saying he was “going to kill this motherf**ker, don’t you know it”.

The judge wrote that the statement “can be ambiguous depending on the context”.

Prosecutors said the officer planted a gun in Smith’s car after the shooting.

The gun found did not have Smith’s DNA on it, but it did have Stockley’s.

The officer asked the case to be decided by a judge instead of a jury.

The former police officer could have been sentenced to up to life in prison without parole if found guilty. He left the St Louis police force in 2013 and moved to Houston.

‘Can kill with impunity’

The case played out not far from the suburb of Ferguson, which was the scene of the fatal shooting of Michael Brown, the unarmed black 18-year-old who was killed by a white police officer in 2014. That officer was never charged and eventually resigned.

“It’s a sad day in St Louis, and it’s a sad day to be an American,” Reverend Clinton Stancil, a protest leader, said, adding that the acquittal was shocking based on the evidence, but not surprising.

Stancil told Reuters news agency that the US hasn’t “made any progress since Ferguson, that’s clear”.

He added that “cops can still kill us with impunity”.

Al Watkins, a lawyer for the mother of Smith’s daughter, Christina Wilson, said his client was appalled by the decision.

He said the ruling showed prejudice, pointing to a line where the judge wrote that an “urban heroin dealer” without a weapon would be an anomaly.

Smith’s mother, Anne, was quoted in local media, saying “my soul is burning, my heart is broken. I ain’t getting no justice. I could never have peace.”

She added that she couldn’t speak for anyone else, but she knew that “the system didn’t work on behalf of Anthony Lamar Smith”.

In many US cities, there are renewed questions about whether the legal system is willing to punish officers involved in deadly shootings.

Grand juries have declined to charge officers involved in the 2014 fatal shooting of Michael Brown, 18, which set off nights of violent protests in Ferguson, and the choking death of Eric Garner, 43, in New York.

Baltimore police officers also were not convicted in the case of Freddie Gray, who died from spinal injuries he suffered after being taken into police custody in 2015.

“You all know this ain’t right and you all continue to do this to us,” he told a local media.

“We don’t mean nothing, like we’re rats, trash, dogs in the streets. Right now, I’m praying for my city because my people are tired of this.”

According to The Guardian newspaper’s The Counted database, at least 1,093 people were killed by police in the United States last year.

According to a watchdog group The Sentencing Project, African American men are six times more likely to be jailed than white men. 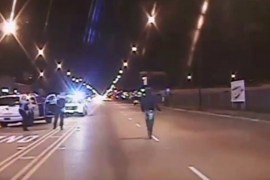 Three Chicago officers charged with conspiracy in the death of a black teen, who died after police shot him 16 times. 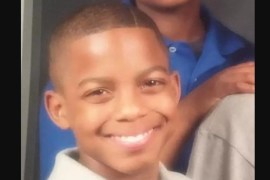 Police in the US state of Texas admit that their initial account of the killing of an unarmed boy was inaccurate.