An Egyptian court has sentenced seven people to death over links to the Islamic State of Iraq and the Levant (ISIL, also known as ISIS) group in Libya.

Saturday’s ruling refers the case to the Grand Mufti, the country’s top theological authority, to solicit his non-binding opinion on the sentences. The referral is a formality in cases of capital punishment.

The court has set a November 25 date for issuing the final verdict in the case, which involves 20 defendants.

The verdict is subject to appeal.

Charges include belonging to a militant group affiliated with ISIL’s branch in Libya, weapons possession, inciting violence and participating in the beheading of 21 Egyptian Coptic Christian workers in Libya in 2015.

Last week, ISIL fighters ambushed a police convoy in Egypt’s Sinai Peninsula, killing 18 officers and wounding seven others in one of the deadliest attacks this year in the restive region.

El-Arish, the capital of North Sinai province, has been a site of regular conflict between government forces and ISIL fighters in recent months. 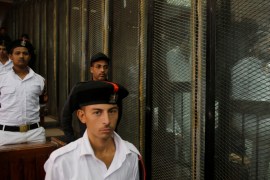 Court hands death sentences to 28 and jails 38 others over the killing of Hisham Barakat in 2015.