By Saif Khalid and Showkat Shafi

Daylpara, Cox’s Bazar – Dr Mohammad Hossain has already seen more than 50 injured Rohingya in the last two hours. Another 40 are waiting their turn at a nearby mosque in Daylpara village on the banks of the river Naf that separates Bangladesh from Myanmar.

Having navigated several kilometres of muddy tracks, hillocks, and swamp-like areas bare-foot, thousands of Rohingya are finally getting the medical attention they urgently need.

Dr Hossain, who leads a team of 32 people, is one of the few medics that has come forward to help the exhausted and persecuted community who have fled to Bangladesh over the past three weeks.

“I took leave from my hospital and came here to help Rohingya, who desperately need medical aid,” said Hossain, who works at the Bangladesh Institute of Research and Rehabilitation for Diabetes, Endocrine and Metabolic Disorders in Dhaka.

Someran, 25, fled her village of Rajirbeel with her 12-day-old daughter Sabeha. “I have rashes on my body,” she told Al Jazeera.

“We arrived early this morning and I received medicines and medical attention. I am hopeful my rashes will go away soon, but I was worried for my baby.”

More than 409,000 Rohingya have arrived in Bangladesh since August 25 with many of them passing through Daylpara, a remote village some 90km from Cox’s Bazar – one of the first ports of entry for the Muslim minority fleeing a military crackdown.

“These are the people in a most desperate situation because not only they do not have enough food, but also clean water or latrines.

“So you have a very, very high-risk situation, particularly for children. If they drink dirty water, they will get diarrhoea and if they are malnourished they will die.”

Since 1948, when the British left Myanmar, the Rohingya have faced entrenched discrimination by the country’s military governments and were stripped of their citizenship in 1982.

Since 2012, Myanmar has witnessed a disturbing rise in religious intolerance, with the Rohingya and other Muslims frequently attacked.

The horrors they’re escaping are manifest in the wide and expansive sky from the Bangladeshi side of the border, with thick plumes of smoke billowing from villages set ablaze by the Myanmar army and allied mobs.

“People are fleeing their homes with very few belongings and we hope that we can relieve some of their suffering by providing much-needed healthcare, water and food,” Ikhtiyar Aslanov, the ICRC’s head of delegation in Bangladesh, said in a statement.

“However, addressing the needs of all people will not be possible without additional donor support.”

The influx of Rohingya has overwhelmed local administrations and aid agencies, the two camps run by the UNHCR at Kutupalong and Nayapara are sheltering more than the double their capacity of 34,000.

“diarrhoea, respiratory, skin infections and anxiety disorder are the common diseases we come across.”

Ahmed also rued the lack of counselling for patients suffering from anxiety disorders.

“Between five and 10 percent suffer from depression and anxiety disorder, mostly women and children,” he said, adding that the camps were being upgraded to include counselling facilities.

Saiful Islam Joy, an executive magistrate at Cox’s Bazar district administration, called on Bangladesh to provide saline and water to the refugees.

“The current measures are workable but more efforts are needed to prevent the situation from worsening,” he said.

A district government official told Al Jazeera that some 80,000 Rohingya children in Ukhiya camp will be vaccinated from Saturday and an additional 30,000 children would be vaccinated at Teknaf region.

Aid agencies have also emphasised on the need for safe water, vaccination, access to primary healthcare and sanitation.

“We are providing medical services, pure drinking water on a regular basis with the help of our partners ICRC and Qatar Red Crescent,” said Mozharul Haq, the head of the Bangladesh Red Crescent.

“The influx is unprecedented, and we are doing our best to help people.” 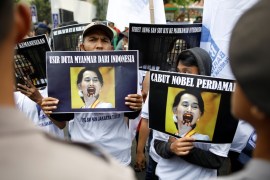 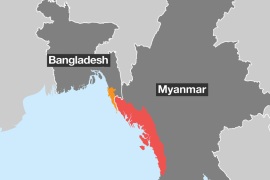