President Donald Trump hinted he might move to derail the landmark nuclear agreement with Iran next month.

The United States agreed on Thursday to continue for now to exempt Iran from nuclear-related sanctions but slapped new measures on targets accused of cyber-attacks or destabilising the region.

The decision to continue to waive the sanctions was expected, but the new sanctions and some tough words from Trump will be seen as a victory for opponents of the 2015 Iran nuclear deal.

Trump is expected to decide before October 15 whether Iran has breached the nuclear agreement, and critics fear he may abandon an accord they say prevents Tehran from building a nuclear bomb.

“You’ll see what I’m going to be doing very shortly in October,” Trump told reporters travelling with him on Air Force One. “The Iran deal is one of the worst deals I’ve ever seen.

“Certainly at a minimum the spirit of the deal is atrociously kept. The Iran deal is not a fair deal to this country. It’s a deal that should not have ever been made.”

A senior administration official, speaking on condition of anonymity, called the waiver “a holding action”.

“This is the action that the US is taking in the interim while the president and his cabinet come to a final decision in consultation among themselves and in consultation with allies.”

The Iran deal, approved by Trump’s predecessor Barack Obama, was implemented under a Joint Comprehensive Plan of Action, or JCPOA, and enshrined in UN Security Council Resolution 2231.

Under the JCPOA, Iran surrendered much of its enriched uranium, dismantled a reactor and submitted nuclear sites to UN inspection, while Washington and Europe lifted some sanctions.

The International Atomic Energy Agency (IAEA) says Iran has lived up to the terms of the nuclear agreement, but Washington and its allies have been angered by Tehran’s other actions.

Critics say Trump abandoning the deal would pave the way for Iran to resume nuclear enrichment and would send a signal to North Korea and other proliferators that a diplomatic solution can be scrapped at the president’s whim.

“The consequences of a unilateral withdrawal from the deal would be disastrous, isolating the United States while risking a second nuclear crisis and a disastrous war,” said Trita Parsi, president of the National Iranian American Council and a vocal supporter of the agreement.

Obama administration officials who negotiated the deal issued a stark warning that if Trump declares Iran to be in violation of the deal, it could collapse. This could alienate the powers that co-signed the accord – Britain, China, France, Germany and Russia.

US Secretary of State Rex Tillerson, speaking in London, said Trump would “take into account the totality of Iranian threats, not just Iran’s nuclear capabilities”.

UK Foreign Secretary Boris Johnson agreed that “the Iranians have got to behave and fulfil their side of their bargain. They have got to stop adventurist and expansionist plans, causing trouble in Yemen, Syria or anywhere else.”

But Johnson added: “On the other side, we in the UK feel that Iran – a country of 80 million people, many of them young and potentially liberal – could be won over. I think it is important they see there are benefits from the JCPOA. So we in the UK want that alive.” 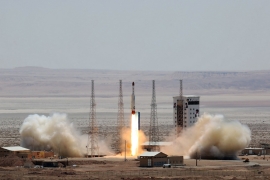