The reports come as Saudi state news agency SPA said authorities were uncovering “intelligence activities for the benefit of foreign parties” by an unnamed group of people. It did not comment on the reported arrests.

On Sunday, online activists said up to 20 influential Saudi preachers and religious scholars had been arrested, including some of the kingdom’s most influential preachers.

Activists dedicated to monitoring and documenting what they describe as “prisoners of conscience” reported on social media on Tuesday that at least eight prominent figures, including scholars, academics, television anchors and a poet, had been “confirmed” detained since Monday.

ALQST, a London-based Saudi rights group, also reported more arrests, including several of the same people, although it gave no specific figure.

“[Salman] Al-Awdah, [Awad] al-Qarni, Farhan al-Malki and Mostafa Hassan [are confirmed],” said Yahya al-Assiri, ALQST head, referring to four of those reported to have been arrested.

“The rest are also correct, but I don’t have any specific information,” he added.

A Saudi security source told Reuters news agency the suspects were accused of “espionage activities and having contacts with external entities including the Muslim Brotherhood”, which Riyadh has classified as a “terrorist” organisation.

The group linked them to the Gulf crisis and urged Saudi King Salman bin Abdulaziz to order their release.

Among those reportedly arrested was Salman al-Audah, a prominent Muslim preacher and member of the IUMS’ board of trustees.

IUMS said the scholars “should not be used as pawns in political disputes”, referring to the crisis between Qatar and four other Arab states – Saudi Arabia, the United Arab Emirates, Bahrain and Egypt.

“In regards to the crisis [with] the Gulf Cooperation Council (GCC) member states, Audah has done nothing but call for unity between these brotherly countries,” the statement read, noting that his last tweet urged GCC members to “come together for the sake of their people”.

The IUMS is an organisation of Islamic theologians and is headquartered in Qatar.

About 90,000 Muslim scholars are connected through the union, which claims to bring together Sunni and Shia Muslims. 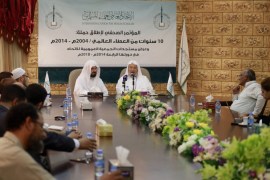 Preachers and scholars arrested in Saudi Arabia ‘should not be used as pawns in political crisis’, Doha-based IUMS says.