Tens of thousands of people have taken to the streets across France to protest against plans by President Emmanuel Macron to make the country’s laws more flexible.

A day of strikes and demonstrations was launched by France’s biggest trade union, the CGT, on Tuesday opposing Macron’s reforms, which are intended to tackle high unemployment by loosening the rules that govern how businesses hire and fire staff.

About 4,000 strikes and 180 protests were organised by the CGT, with rail workers, students and civil servants urged to protest.

At lunchtime, crowds of a few thousand were reported in the cities of Nice, Marseille, Saint Nazaire and Caen.

Suburban trains in Paris were disrupted but most other transport services operated normally, with the other two main union groups largely shunning the CGT’s call for a one-day strike.

The turnout for Tuesday’s nationwide protest will serve as an indicator of how much opposition the president faces from the country’s influential workers unions.

“What is going to be a surprise is when he ends up giving ground,” far-left leader Jean-Luc Melenchon told reporters as he joined a protest in the southern port of Marseille.

The decrees are due to be adopted by the government on September 22.

The reforms to the labour code are a flagship policy for Macron, who says businesses need more flexibility in order to create jobs.

Under his reforms, small company bosses will be given more freedom to negotiate working conditions directly with their employees rather than being subject to industry-wide agreements.

Compensation for unfair dismissal would also be capped, a move that has particularly angered unions, along with steps to make it easier for foreign-based companies to lay off staff in struggling French operations.

Macron has vowed to press ahead with the reforms and deliver on his campaign promise this month.

Al Jazeera’s Paul Brennan, reporting from the capital, Paris, said it will be a hard-fought campaign by the president to get the measures approved.

“It seems like it is going to be a showdown month here in France between the president’s office and the unions who are out here in the streets in the tens of thousands,” he said.

Macron sparked a backlash last week by describing opponents of the shake-up as “slackers” and cynics, in comments blasted as “scandalous” by CGT chief Philippe Martinez.

“This is not a labour law, it is a law that gives full powers to employers,” said the CGT’s Martinez on Sunday.

The CGT plans to follow Tuesday’s actions with another protest day on September 21, with another two days later called by Melenchon.

Recent polls show that only around 40 percent of French voters are satisfied with Macron’s performance, with analysts putting the disappointment down to a combination of gaffes and poor communication.

The president, elected in May, is determined to tackle an unemployment rate that has drifted between 9 and 10.5 percent since 2010. 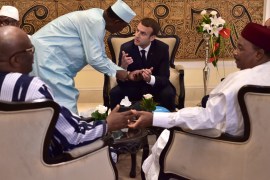 President Emmanuel Macron was born after the end of colonialism but he very much displays colonial thinking. 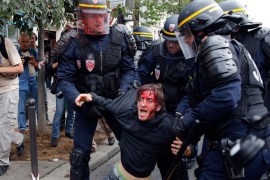