Syrian army reinforcements arrived in Deir Az Zor on Monday for a new push against ISIL (also known as ISIS) as the second day of air raids reportedly killed 19 civilians in the area.

Since 2014, ISIL (the Islamic State of Iraq and the Levant group) has controlled most of Deir Az Zor city and the surrounding province, which borders territory the armed group holds in Iraq. The remaining 40 percent of the city still held by the government – and home to about 100,000 civilians – was under a crippling ISIL siege.

“Huge military reinforcements – including equipment, vehicles and fighters – have arrived in Deir Az Zor in advance of an attack to push Daesh from the city’s eastern neighbourhoods,” said Syrian Observatory for Human Rights chief Rami Abdel Rahman, using the Arabic acronym for ISIL.

“Russian and Syrian regime warplanes are striking IS positions in the city and its outskirts.”

Deir Az Zor is the capital city of the oil-rich eastern province of the same name, regarded as a strategic prize by both Russian-backed Syrian troops and US-backed fighters.

Syrian forces have scored major advances in recent days, breaking a pair of ISIL sieges on the city and capturing territory around it.

However, the rapid advance has been accompanied by deadly air raids with the Observatory reporting 19 civilians killed on Monday in suspected Russian air raids northwest of the city.

The raids came a day after the Britain-based war monitor said Russian attacks had killed 34 civilians southeast of the city as they fled across the Euphrates River.

Two sets of air raids 30 minutes apart hit civilians sheltering in tents along the Euphrates and boats on the river, the monitor said.

The attacks come as the Syrian army prepares to push into the eastern ISIL-held part of Deir Az Zor city, according to the Observatory.

Moscow intervened in Syria in September 2015 in support of its ally President Bashar al-Assad.

Fighters from the US-backed Syrian Democratic Forces on Saturday announced a separate offensive to capture ISIL territory east of the Euphrates River, which slices diagonally across Deir Az Zor province.

By Monday, the SDF had seized much of the province’s northeast and was just a few kilometres across the river from Deir Az Zor city.

Colonel Ryan Dillon, spokesman for the US-led coalition backing the SDF, said the militia had made “significant gains”, capturing about 250-square kilometres since the operation began.

The SDF, an alliance of Arab and Kurdish fighters, is also battling ISIL in its de facto capital Raqqa with backing from the US-led air coalition.

Although the SDF has yet to reach Deir Az Zor city itself, tribal figures affiliated with the alliance said they were laying the groundwork for governing the city after ISIL’s defeat.

A statement, published by SDF’s media council, announced the establishment of “a preparatory committee that will discuss the basis and starting points for a civil council for Deir Az Zor”.

According to the statement, consultations would aim to reach a “formulation that will express the aspirations of all our people in Deir Az Zor”.

The Deir Az Zor Civil Council “will be responsible for running the city immediately after its liberation”.

It made no mention of Syrian forces and did not say whether the civil council would coordinate with government authorities.

SDF has said its assault in Deir Az Zor province is not in coordination with Russian or Syrian forces.

But the coalition, the SDF, Syria’s government and Russia have agreed on a “de-confliction line” in northeastern Syria to prevent the two offensives from clashing.

Aaron Stein, a senior fellow at the Atlantic Council’s Rafik Hariri Center for the Middle East, said he did not expect the SDF to enter Deir Az Zor city.

But, he added: “The SDF is now racing. The SDF is in a race with the regime. The regime forced everyone’s hand. They moved faster than expected up the river, so things started to move.”

Syria’s conflict erupted in 2011 with protests calling for Assad’s removal, but it has since evolved into a complex war drawing in world powers.

About 400,000 people have been killed, and millions have been forced to flee their homes.

Monitor reports artillery and rocket firing at ISIL positions in lead-up to entry into southwestern part of al-Sukhna. 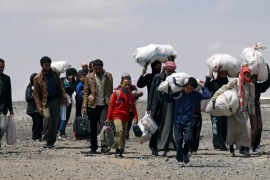