Iraqi authorities are holding about 1,400 foreign wives and children of suspected ISIL fighters in a camp after government forces expelled the group from one of its last remaining strongholds in Iraq, security and aid officials said.

Many of them say they are from Russia, Turkey and Central Asia, but there are also some from European countries, the officials said.

They have mostly arrived at the camp south of Mosul since August 30.

An Iraqi intelligence officer said they were in the process of verifying the nationalities of the wives and children with their home countries since many of the women no longer had their original documents.

It is the largest group of foreigners linked to the Islamic State of Iraq and the Levant (ISIL, also known as ISIS) group to be held by Iraqi forces since they started expelling the fighters from Mosul and other areas in northern Iraq last year, an aid official said.

Thousands of foreigners have been fighting for ISIL in Iraq and Syria.

A senior security officer said the authorities were trying to find a safe place to house the families while negotiating with embassies for their return home. They are not allowed to leave the camp.

Reuters news agency reporters saw hundreds of the women and children sitting on mattresses crawling with bugs in tents in what aid workers called a “militarised site”.

Turkish, French and Russian were among the languages spoken.

“I want to go back (to France) but don’t know how,” said a French-speaking woman of Chechen origin who said she had lived in Paris before.

She said she did not know what had happened to her husband, who had brought her to Iraq when he joined ISIL.

The security officer said the women and children had mostly surrendered to the Kurdish Peshmerga near the northern city of Tal Afar, along with their husbands.

The Kurds handed the women and children over to Iraqi forces but kept the men – all presumed to be fighters – in their custody.

Many of the families had fled to Tal Afar after Iraqi troops pushed ISIL out of Mosul on August 30.

Iraqi forces retook Tal Afar, a city of predominantly ethnic Turkmen that has produced some of ISIL’s most senior commanders, last month. Most of its prewar population of 200,000 have fled.

Aid workers and the authorities are worried about tensions between Iraqis, who lost their homes and are also living in the camp, and the new arrivals.

Many Iraqis want revenge for the harsh treatment they received under ISIL’s interpretation of Sunni Islam that they imposed in Mosul and the other areas they seized in 2014.

“The families are being kept to one side (of the camp) for their own safety,” an Iraqi military intelligence officer said.

The Norwegian Refugee Council (NRC), which is supporting the 541 women and their children, said Iraq “must swiftly move to clarify its future plans for these individuals”.

“Like all those fleeing conflict, it is imperative that these individuals are able to access protection, assistance, and information,” NRC said in a statement. “They are in de facto detention.”

Western officials are worried about fighters and their relatives coming home after the collapse of ISIL’s “caliphate”.

French officials have indicated a preference for citizens found to be affiliated with ISIL to be prosecuted in Iraq.

“The general philosophy is that adults should go on trial in Iraq,” a French diplomatic source told Reuters last month, of those found to have been fighters.

“We think children would benefit from judicial and social services in France.”

The women in the camp were cooking noodles or lying on mattresses with their babies in the hot tents. Many were still wearing the black abayas and face-veils which were mandatory in areas that ISIL controlled.

“My mother doesn’t even know where I am,” said a 27-year-old French woman of Algerian descent who said she had been tricked by her husband to come with him via Turkey into Syria and then Iraq when he joined ISIL last year.

“I had just given birth to this little girl three months before,” she said holding the infant and asking not to be named.

“He said ‘let’s go for a week’s holiday in Turkey.’ He had already bought the plane tickets and the hotel.”

After four months in Mosul, she ran away from her husband to Tal Afar in February. She was hoping to make it back to France, but he found her and would not let her leave.

She tearily recounted how her five-year-old son was killed in June by a rocket while playing in the streets.

“I don’t understand why he did this to us,” she said of her husband, who she said was killed fighting in Mosul. “Dead or alive – I couldn’t care less about him.”

She and a few other families had walked for days to surrender at a Kurdish Peshmerga checkpoint beyond al-Ayadiyah, a town near Tal Afar where the fighters took their last stand.

“We were getting bombed, shelled and shot at,” she said.

Kurdish officials said dozens of fighters surrendered after the fall of Tal Afar but gave no details. One Tal Afar resident said he had seen between 70 and 80 fighters fleeing the town in the final days of the battle. 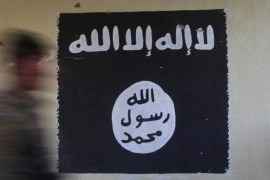 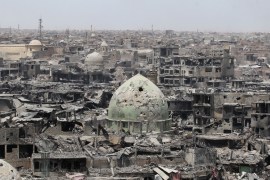