Hurricane Irma bore down on southern Florida on Sunday with 210kph winds, flooding Miami streets and knocking out power to more than three million homes and businesses.

Even before it came ashore, Florida was feeling Irma’s fury with at least three people killed and trees and apartment towers swaying in high winds.

The storm was one of the most powerful ever seen in the Atlantic; it has already killed two dozen people in the Caribbean and pummeled Cuba with 11-metre waves. It made landfall as a Category 3 hurricane on Marco Island, just south of Naples, Florida Sunday afternoon with 185kph winds.

It was later downgraded to a Category 2 hurricane as it approached Naples, with dangerous storm surges expected after the eye of the storm passed.

There was a serious threat of flooding from storm surges of up to 4.5 metres along Florida’s west coast – enough to cover a house.

“This is a life-threatening situation,” Governor Rick Scott told a press conference.

Irma is expected to cause billions of dollars in damage to the third-most populous US state.

Tens of thousands of Floridians were hunkering down in shelters for a direct hit from the monster storm, after more than 6.3 million – nearly one-third of the state’s population – were ordered to evacuate.

For those still at home, it was already too late to escape the wrath of what could be the worst hurricane in storm-prone Florida.

The storm winds downed a construction crane and shook tall buildings in Miami.

Deme Lomas, who owns Miami restaurant Niu Kitchen, said he saw a crane torn apart by winds and dangling from the top of the building.

“We feel the building swaying all the time … it’s like being on a ship,” Lomas said in a phone interview with Reuters news agency from his 35th-floor apartment.

Miami streets were flooded as water crept up through the city’s financial district and newly built high rises.

“We feel that we have done all that we can … whether this storm hits us as a Category 5, 4, or what they’re saying since it’s moved away – a Category 1 or 2. It doesn’t matter. We made the right call.”

Florida Power and Light said that more than three million customers were without power by Sunday evening.

The utility company added that full restoration of service could take weeks.

MacDill Air Force Base, the military installation that is home to US Central Command, issued mandatory evacuation orders with the eye of the storm expected to pass over its home city of Tampa early on Monday.

After blasting through the nearby Cuban coastline, Irma weakened from a maximum-strength Category 5 to a Category 3 storm, but then strengthened again to a Category 4 with 210km/h winds, as it approached southern Florida.

The hurricane ripped roofs off houses, collapsed buildings and flooded hundreds of kilometres of coastline as it raked Cuba’s northern coast after devastating islands the length of the Caribbean in a trail of destruction that has left 25 people dead so far.

Terrified Cubans who rode out Irma in coastal towns, after the storm made landfall on Friday on the Camaguey archipelago, reported “deafening” winds, uprooted trees and power lines, and blown rooftops. 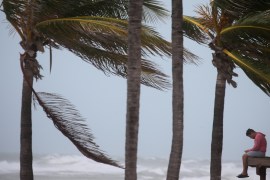 Residents hunker in shelters amid power cuts and waves of rain, as hurricane strengthens to Category 4. 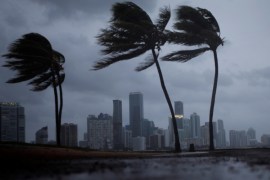