Former Georgian President Mikheil Saakashvili and a crowd of supporters have shoved their way through a line of guards at the Ukrainian border, making good on the politician’s vow to return to the land that had stripped him of citizenship.

Saakashvili says he wants to return to challenge that decision in court and get back into politics.

He was initially refused entry on Sunday at the Medyka-Shehyni crossing point on the Polish-Ukrainian border.

But a crowd of supporters, who chanted “Misha, Misha” – a diminutive of his name – forced their way into Ukraine with Saakashvili, who now risks extradition to his native Georgia.

READ MORE: Ukraine strips Saakashvili of his only citizenship

The return of the divisive and headstrong Saakashvili, who became governor of Ukraine’s Odessa region after being Georgian president from 2004 to 2013, poses a strong challenge to Ukrainian President Petro Poroshenko, who once was Saakashvili’s patron.

Poroshenko stripped Saakashvili of his citizenship in July amid a dramatic falling out.

Saakashvili was appointed to the Odessa post in 2015 on the strength of his record of fighting corruption in Georgia. However, he resigned the post after only 18 months, complaining that official corruption in Ukraine was so entrenched he could not work effectively.

Saakashvili’s return to Ukraine carries risks for the former Georgian leader, who is currently stateless.

Georgia, where he faces accusations of abuse of power and misappropriation of property, has sent an extradition request for him to Ukraine. It is not clear if Ukraine intends to honour that request.

Saakashvili has said the allegations against him in Georgia are politically motivated.

The border breakthrough at the Medyka-Shehyni crossing point came after a day of drama and repeatedly changing travel plans.

Earlier on Sunday, Ukrainian authorities blocked a Kiev-bound train in Poland carrying Saakashvili, who eventually got off and took a bus to the Medyka crossing.

“Why is President Poroshenko so afraid of me,” Saakashvili told reporters before breaking through to Ukraine.

“I am not afraid. I demand to be let into my Ukraine,” he said.

“I was a full citizen without felony or conviction and now I want to go forward towards Ukrainian people.”

Supporters who accompanied him to the crossing point included former Ukrainian Prime Minister Yulia Tymoshenko and Mustafa Nayyem, a politician who was a key figure in the 2013-2014 protests that drove Russia-friendly Ukrainian President Viktor Yanukovych out of the country.

Prosecutor-General Yuri Lutsenko said late on Sunday that charges would be pursued against organisers of Saakashvili’s unauthorised entry.

The Ukrainian Interior Ministry said 17 police and border guards were injured in the confrontation.

‘He opened our eyes’

The charismatic Saakashvili is credited with pushing through pro-Western and anti-corruption reforms in Georgia.

At the Medyka border, supporters expressed hope that Saakashvili could deliver some of the same types of reforms in Ukraine.

“I am in support of Mikheil Saakashvili because I live here and I want for this person who lifted Georgia from its knees out of the dirt, for him to come here and help us do this too,” one supporter said.

Another said he came to support the former Georgian leader “because he opened our eyes as the Odessa region governor”.

“He showed the scale of corruption of Ukraine. He showed who steals, how much and how.” 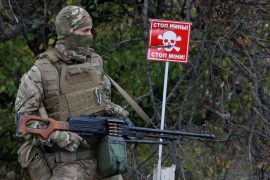 The latest surge in fighting with Russian-backed rebels along the volatile front line is the bloodiest in recent months. 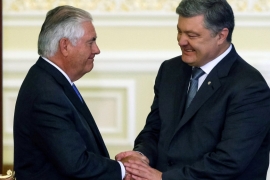