At least 24 people died and another 15 were feared trapped when a building collapsed in India’s financial capital of Mumbai on Thursday after days of heavy rain swamped the city.

Rescuers using diggers could be seen sifting through the remains of the four-storey residential building, which gave way around 08:40am (03:10 GMT) in the densely populated area of Bhendi Bazaar.

Nearly a dozen others were missing and feared to be trapped beneath the huge mound of broken concrete slabs and twisted steel girders.

It was the latest deadly housing collapse to strike the teeming metropolis – shining a spotlight on poor construction standards in the country – and came after heavy rains and inundations in the city killed more than 10 people.

“There was a massive bang. We couldn’t see anything due to the dust and smoke. Once the dust settled, we realised it was a building collapse,” area resident Amina Sheikh told Reuters news agency.

Eight or nine families were believed to have been living in the building, the official said.

“People here say they watched some of their friends and relatives pulled out of the rubble. They also say that there were complaints of structural damage on the building before, but authorities failed to act on it.”

Indian media said the building was named Ariswala and housed a sweet shop warehouse on the ground floor.

Smoke rose from the ruins.

A housing trust that was looking to redevelop the area said the building had been declared unsafe in 2011 and the housing board had offered alternative accommodation to tenants, but only seven families had moved out by early 2014.

One resident in the area said people had not been given proper details of what type of new housing they would be provided, making them reluctant to leave.

It was not immediately clear what housing regulators had done to encourage residents to evacuate.

The building was also among 791 buildings that the city’s municipal corporation has listed as dangerous this year.

“The building is said to be 110 years old,” said Al Jazeera’s Gopalan. “It was already quite dilapidated.

“Mumbai is home to a lot of old buildings. Many were wary that there would be some kind of an issue like this, given the rains,” she added.

Gopalan said the disaster was “not an isolated occurrence” in a city “where building collapses happen with alarming frequency.

“That’s mainly due to the fact that landlords often don’t want to pay for what could be extensive repairs, whiles tenants refuse to move out as property prices here are sky-high – some of the most expensive in the world.

“They say if they do developers will swoop in and and they will not be able to afford  to live in this city.”

The building is located in Mumbai’s Dongri neighbourhood, an area full of narrow streets with closely-packed old buildings.

Building collapses are common in India, especially during the monsoon season from late June to September, when heavy rains lash the teeming metropolis.

Severe downpours began on Tuesday and caused flooding across Mumbai and the neighbouring region of Thane.

The city is particularly vulnerable to deadly collapse with millions forced to live in cramped, ramshackle properties because of rising real estate prices and a lack of housing for the poor.

In July, 17 people, including a three-month-old baby, died when a four-storey building gave way in the northern suburb of Ghatkopar.

In 2013, 60 people were killed when a residential block came crashing down in one of Mumbai’s worst housing disasters. 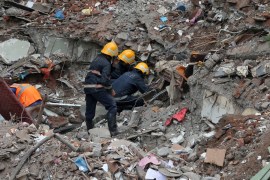 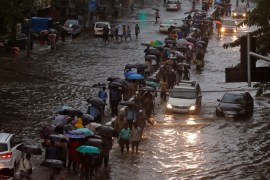