A senior White House official’s suggestion that the bomb attack on a mosque in the US state of Minnesota could have been staged has sparked derision on social media.

Sebastian Gorka, a senior adviser to US President Donald Trump, told MSNBC on Tuesday that some recent hate crimes were fake.

He failed to give examples to back his allegations.

The comments led to criticism of the official, who has ties to far-right activists in Hungary and was sacked from a consultancy role by the FBI over his anti-Islam rhetoric, according to US outlet, the Daily Beast.

When asked by anchors whether the White House would be commenting on the Minnesota bombing that took place in the early hours on Saturday, Gorka said it would but only after an investigation into who was behind the attack.

“There’s a great rule, all initial reports are false, you have to check them, you have to find out who the perpetrators are,” said Gorka.

“We’ve had a series of crimes committed, alleged hate crimes by right-wing individuals, in the last six months, which turned out to be actually propagated by the left.”

“People fake hate crimes in the last six months with some regularity. I think it’s wise to find out what exactly is going on before you make statements,” he added.

In May, two men were killed by a white supremacist in Oregon when they tried to stop him abusing two Muslim girls on a bus.

The Council on American-Islamic Relations (CAIR) noted a 91 percent rise in anti-Muslim hate crime since the start of the year.

The comments by the Trump official on MSNBC prompted criticism online.

No one was hurt when the explosion happened during morning prayers at the mosque in Bloomington, a suburb of Minneapolis.

The mosque affected has received more than $100,000 in donations after the attack.

The FBI is trying to determine who was behind the explosion and Minnesota’s Governor Mark Dayton has labelled the incident a “terrorist attack”.

Trump has not spoken about the attack on the place of worship but has posted 26 tweets on topics as varied as “fake news”, the “failing” New York Times, a senator he described as a “con artist”, the ongoing tensions with North Korea, and new job figures.

The US president was criticised on social media after the attack for his silence and his lack of response to other attacks when the perpetrators do not appear to be Muslim.

In April the online magazine Forward published a piece detailing Gorka’s ties to a Hungarian far-right groups that stretched back decades.

Vitezi Rend has historic links to the Nazis during their occupation of Hungary, but Gorka said he “never swore allegiance formally”. 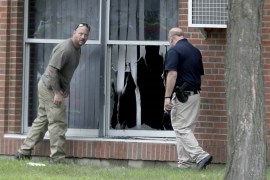