At least 10,000 people have died in Yemen as a result of the Saudi-led coalition’s restriction on airspace and the closure of Sanaa airport a year ago, Norwegian Refugee Council (NRC) said citing Sanaa’s Ministry of Health.

The rights group joined 14 other aid organisations that called on warring parties in Yemen to reopen the country’s main airport on Wednesday, saying the year-long closure was hindering the flow of aid and preventing thousands of patients from flying abroad for life-saving treatment.

“Denial of access to travel has condemned thousands of Yemenis with survivable illnesses to death,” Mutasim Hamdan, the NRC’s director in Yemen, said in a statement.

“Without access to safe, commercial travel, Yemenis are left with no way to access critical medical care.

“The result is devastating. Thousands of women, men and children who could have been saved lost their lives.”

The coalition, which intervened in the Yemen conflict in 2015 to support the internationally recognised government of President Abd-Rabbu Mansour Hadi, controls the airspace over Yemen.

Sanaa International Airport was closed on August 9 last year “leaving many Yemenis with no safe means of transport in or outside of the country”, NRC said.

Citing UN figures, the NRC estimated that 7,000 Yemenis went abroad from Sanaa annually for medical treatment before the conflict.

Now, the number of people needing life-saving healthcare is around 20,000 over the past two years because of the violence, the group added.

‘Journey was too much’

The NRC told the story of Mohammed, whose father, in need of urgent treatment outside of the country, died after travelling for more than 24 hours by road to Seiyun Airport in southern Yemen.

“The doctors said it was dangerous for him to travel all the way there and he might die on the way, but it was our only option,” Mohammed was quoted as saying in the NRC statement.

“We had to pass through many checkpoints, but the journey was too much for my father.”

In addition, another 10,000 people have been killed in violent attacks and more than three million displaced since the conflict began, according to the UN.

The country is also coping with the “world’s worst cholera outbreak” as the heathcare system continues to crumble.

The outbreak has independently claimed the lives of at least 1,800 people and infected more than 370,000 others, according to the World Health Organization.

The Saudi-led coalition has repeatedly been accused of blocking aid to Yemen.

It also said aid efforts have been hampered by delays and refusals of visa by the Yemeni government and by the rebels controlling the capital.

According to the NRC’s Hamdan, “Yemen’s public services are crumbling under the pressures of war”.

“Hundreds of thousands more people are sick, injured or in need of services, but there are drastically reduced resources to meet them,” he said.

“It is critical that all channels of domestic and international air movement are reopened so Yemenis can get help, and help can get to Yemenis.” 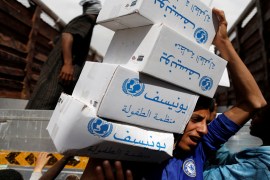 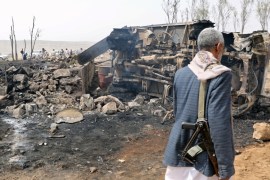 At least 12 civilians, including nine from same family, died in Saada province in attacks blamed on Saudi-led coalition.