French police have arrested the main suspect behind an attack on soldiers in a suburb of the capital, Paris, the French prime minister confimed on Wednesday.

At least six French soldiers were injured after they were hit by a vehicle in the northwestern Paris suburb of Levallois-Perret earier in the day, according to the city’s police authority.

A Reuters witness at the scene saw a BMW car, the model used in the attack, with several bullet holes in it. Ambulances surrounded the vehicle.

One policeman was wounded by a stray bullet in the operation, which took place on the A16 motorway near Marquise, close to the ports of Boulogne-Sur-Mer and Calais.

Gerard Collomb, the French interior minister, said that the incident was a “deliberate act”.

“[The car] was driving slowly and then, about five metres from the soldiers, the car accelerated and hit the soldiers,” he said. “It is now the sixth time that military forces from Operation Sentinelle are the target (of attacks) since 1 January 2015.”

Al Jazeera’s Natacha Butler, reporting from Paris, said that police stopped a car driving up the motorway that links Paris to the northern coast.

Speaking to broadcaster BFM TV, Balkany said that what he called a “disgusting” act of aggression was “without any doubt” premeditated.

The French Defence Minister Florence Parly said, “I want to condemn the extremely cowardly act committed this morning against Sentinelle forces who, as you know, have the objective of ensuring the security of our fellow citizens in the country.”

The incident comes four days after a teenager with psychiatric problems tried to attack security forces guarding the Eiffel Tower.

France remains on maximum alert after a string of attacks that have killed more than 230 people over the past two years.

In February, a man armed with a machete attacked four soldiers on patrol at Paris’ Louvre Museum, while in April another attacker shot and killed a policeman on the Champs Elysees presidential palace.

In June, a 40-year-old Algeria doctorate student, who had pledged allegiance to the Islamic State of Iraq and the Levant (ISIL, also known as ISIS) group, attacked a policeman with a hammer outside Notre Dame cathedral. 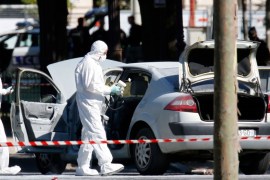 Car rams into police vehicle on Champ-Elysees in Paris

Police said that the driver of the car is the only casualty in what they described as an ‘attempted attack’.