At least four Palestinians have been wounded, one of them seriously, after Israel carried out air attacks on Hamas locations in Gaza.

The Israeli military said it carried out the air attacks in response to a rocket fired towards Israel.

“The airstrikes targeted Hamas positions in the centre of the Gaza Strip,” Qasem told Al Jazeera.

“The occupation claims that a group from Gaza launched rockets at them, but there is no side in Gaza that has claimed responsibility.

“We are maintaining the period of calm and did not launch any rockets. It is not beneficial for the occupation to violate this period of calm.”

The emergency director at the al-Shifa hospital in Gaza, Ayman al Sahbani, told Al Jazeera that three of the injured were discharged after undergoing treatment.

“The fourth person, a 26-year-old, is in serious condition. He has a fractured skull and is unconscious in the ICU,” Sahbani said.

Israel holds Hamas responsible for all fire coming out of the Gaza Strip.

Israel and Hamas have fought three wars since the group took control of Gaza, most recently in 2014. 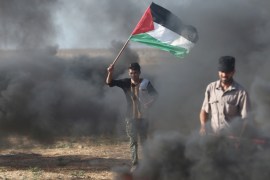 No casualties after Israel targets at least three areas in the Hamas-run territory, according to Palestinian officials. 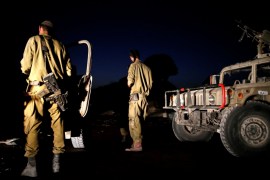 Israel is entertaining another round of fighting on the besieged strip.