The United Nations has criticised Venezuela’s “widespread and systematic use of excessive force and arbitrary detentions” against protesters, amid worsening tensions and fresh moves against the opposition.

The UN’s human rights office based in Switzerland on Tuesday highlighted witness accounts of police and soldiers using “disproportionate force to instil fear, crush dissent, and to prevent demonstrators from assembling, rallying and reaching public institutions to present petitions”.

The protests have stemmed from anger over the installation of an all-powerful Constituent Assembly that they see as a power grab by Maduro.

The dire economic situation also has stirred deep bitterness as people struggle with skyrocketing inflation and shortages of food and medicine.

On Tuesday, the Constituent Assembly, which does not include opposition supporters due to their boycott, convened in the same building as the opposition-controlled National Assembly and decreed itself superior to all other government institutions.

The building was taken over late on Monday with the help of soldiers led by Delcy Rodriguez, the head of the pro-Maduro assembly and former foreign minister.

The opposition legislators sought to enter the building but they were not allowed, sharpening tensions between the rival bodies.

Also on Tuesday, the country’s supreme court sentenced a prominent opposition mayor in the middle of the night to 15 months in prison and stripped him of his right to hold political office.

Ramon Muchacho, the mayor of the upscale Caracas municipality of Chacao, was one of a group of opposition mayors who had been threatened with arrest for failing to prevent street protests in their jurisdictions.

Muchacho’s whereabouts were not immediately known, but he denounced the ruling on Twitter, saying that “all of the weight of the revolutionary injustice has fallen on my shoulders” for doing his job to guarantee the constitutional right to protest.

The July 30 election of the Constituent Assembly was marred by street violence, in which 10 people died, and charges of fraud brought by the UK-based company that supplied the polling technology.

Foreign ministers of 16 Latin American and Caribbean nations, as well as Canada, met in Peru on Tuesday to evaluate further measures. 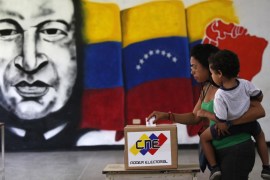 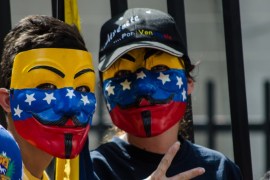