Nairobi, Kenya – Polls have closed in Kenya and vote counting has begun in a tight election to pick a president and a new parliament.

Voting centres closed at 5pm (14:00 GMT) local time on Tuesday. Results are not expected before Wednesday, and the electoral body has seven days to declare a winner.

But Al Jazeera’s Catherine Soi, reporting from the capital Nairobi, said the winner was expected to be announced within 48 hours because “with every delay to the results, there is going to be a lot of tension”.

The country’s electoral body said on Tuesday that heavy rains disrupted voting in parts of the country, but election materials and polling officials were airlifted to the locations.

The Independent Electoral and Boundaries Commission said it would extend voting hours in the affected areas.

Al Jazeera’s Fahmida Miller, reporting from the port city of Mombasa, said there had been a curfew in some parts of Lamu county for security reasons, which affected the voting.

“People who were still voting at 6pm local time in many cases would have to stay the night at that polling station and only leave in the morning once that curfew was lifted,” she said.

More than 19 million Kenyans were eligible to vote with 51 percent of those under the age of 31.

Speaking to reporters after casting his vote, Kenyatta, 55, said he was confident of winning and called for unity.

“I feel good. I feel positive because we have run a positive campaign,” he said.

Kenyatta, the son of the country’s founding father, then called on his competitors to accept the outcome of the election.

OPINION: What will young Kenyans vote for?

Odinga, who lost to Kenyatta in the last election and is competing in his fourth presidential election, voted in Nairobi’s Kibera slum and left without speaking to reporters.

Early on Tuesday, Odinga accused the electoral body of “frustrating” his party’s agent.

In an interview with Al Jazeera on Friday, Odinga accused the government of a plot to tamper with the election results.

“There are attempts to manipulate the results,” Odinga said. “The only way [Kenyatta’s party] can win this election is by rigging.”

Kenya descended into violence in 2007 after the opposition, led by Odinga, claimed the election results were rigged in favour of then incumbent Mwai Kibaki.

More than 1,000 people were killed in post-election violence, and some 600,000 were displaced.

Meanwhile, international observers have commended for a strong early turnout.

“I’m impressed by the turnout. There are long queues here. It shows the enthusiasm people have to exercise their democratic right,” John Mahama, former Ghanaian president and chief Commonwealth election observer, said.

“There’s been no incident so far. Voting seems to be going smoothly. It is a good sign for Kenyan democracy,” he added.

To win the election outright, either presidential candidate must garner at least 50 percent of the votes, plus one.

The winning candidate must also receive at least 25 percent of the votes in half of Kenya’s 47 counties to prevent a second round of voting.

If no candidate receives that, the election will go to a runoff, which would be a first in Kenya’s history. 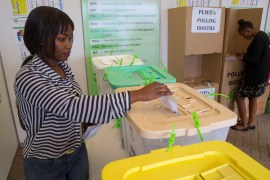