Airbnb is cancelling accounts of far-right activists who appear to have booked reservations in the US state of Virginia before a rally that neo-Nazis and white supremacists are expected to attend.

The march, which is set to take place in Charlottesville on Saturday, has been dubbed “Unite the Right” by organisers and was called to support a local statue of Robert E Lee, the Confederacy’s foremost military leader during the US Civil War.

Among those slated to speak are far-right figures such as Jason Kessler – who claims to be an organiser of the march – and Richard Spencer, a leader in the alt-right movement.

Hundreds are expected to attend the highly publicised rally

In a statement provided to the local NBC29 news station, the holiday rental company Airbnb said its rules require that “members of the Airbnb community accept people regardless of their race, religion, national origin, ethnicity, disability, sex, gender identity, sexual orientation or age”.

The statement added that when patrons violate the terms of service, Airbnb seeks “to take appropriate action including, as in this case, removing them from the platform”.

Kessler, a former journalist and well-known far-right activist, took to Twitter to decry Airbnb’s decision, saying: “It’s time for the alt-right to flex its muscles and boycott” the company.

He also said potential legal action against Airbnb should be considered.

But other social media users mocked the far rightists and balked at the assertion that Airbnb ought to be obliged to provide a service for the attendees.

Nazis are whining that Airbnb won't rent to them for a rally. Boo f-ing hoo. https://t.co/i5V7GxfChd pic.twitter.com/RmSOAFAoX2

The rally will be the third of its kind in Charlottesville in the past four months.

In May, Richard Spencer led a rally of dozens of torch-wielding protesters. They were outnumbered by hundreds of counter-protesters.

Last month, dozens of members of the Ku Klux Klan, the white supremacist group with a history of violent attacks on African Americans, rallied at Charlottesville’s Confederate monument.

Among the groups expected to be present at Saturday’s rally are the Traditionalist Worker Party, the National Socialist Movement, the ultra-nationalist Proud Boys and members of the neo-Nazi Daily Stormer blog.

The Southern Poverty Law Center (SPLC), a watchdog organisation that monitors hate groups, said in a statement that the gathering is likely to be a site of violence between attendees and counter-protesters.

Local community members, anti-fascists and supporters of the Black Lives Matter civil rights movement, among others, have planned a counter-protest.

“The event may well become a seminal point for the alt-right and the extremist hate fringe: It’s a bold move beyond the anonymity of websites, message boards, pseudonyms and social media – a move to take the hardcore, racist, white nationalist message to the public square,” the SPLC said in the statement.

The city is expected to deploy police, sheriff’s deputies and riot-equipped officers from the Virginia State police. 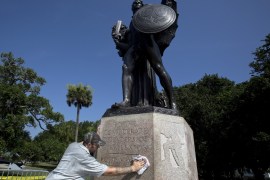 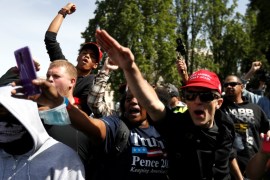 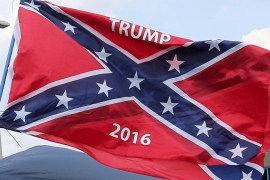