Renewed clashes in the Central African Republic (CAR) are early warning signs of genocide, the UN aid chief said on Monday, calling for more troops and police to beef up the UN peacekeeping mission in the strife-torn country.

Some 180,000 people have been driven from their homes this year, bringing the total number of displaced in the CAR to well over half a million, said Stephen O’Brien.

“The early warning signs of genocide are there,” O’Brien told a UN meeting following his recent trip to the CAR and the Democratic Republic of Congo.

“We must act now, not pare down the UN’s effort, and pray we don’t live to regret it.”

READ MORE: Muslims return to CAR to find their homes are gone

O’Brien said it was time to authorise an increase in troops and police serving in the MINUSCA peacekeeping force to enable the mission to “deliver on its critical protection mandate”.

One of the world’s poorest nations, the CAR was pitched into a war between Muslim and Christian armed groups in 2013. It was unleashed when President Francois Bozize was overthrown by a coalition of Muslim-majority rebel groups called the Seleka.

They, in turn, were overthrown by a military intervention led by former colonial ruler, France. Those events sparked some of the bloodiest sectarian violence in the country’s history as mainly Christian armed groups sought revenge.

Christians, who account for about 80 percent of the population, organised vigilante units dubbed “Anti-balaka”, a reference to the machetes used by the Muslim rebels.

The United Nations has 12,350 troops and police on the ground to help protect civilians and support the government of President Faustin-Archange Touadera, who was elected last year.

While Touadera’s government remains in control in Bangui, its authority is weak outside of the capital where former Seleka groups and Anti-balaka fighters have clashed.

Nine MINUSCA peacekeepers have been killed this year, raising alarm that the country is sliding back to the bloodletting that exploded in 2013 following the overthrow of Bozize.

O’Brien said he was horrified by a visit he made to a Catholic church in the southern town of Bangassou where 2,000 Muslims took refuge three months ago, surrounded by Anti-balaka Christian fighters who are threatening to kill them.

“The risks are extremely high, and we must focus properly on whether to relocate them to another site or not,” he said.

Half of the country’s population, or 2.4 million people, are in need of food aid to survive, the largest population in need per capita, he said.

The country is also home to half a million refugees.

“The risk of a relapse into another large-scale humanitarian crisis is imminent,” said O’Brien.

The UN has received only 24 percent of the $497m it has requested in a humanitarian appeal for the CAR. 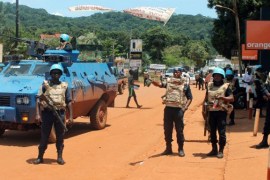 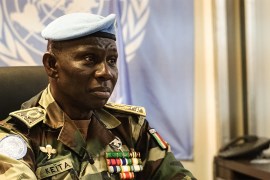