North Korea has come out fighting following fresh UN Security Council sanctions on Pyongyang and after the United States and South Korea celebrated the punishing measures.

North Korea on Monday condemned the sanctions imposed in response to its weapons programmes, saying it would not negotiate over nuclear arms while threatened by the US.

“We will not put our self-defensive nuclear deterrent on the negotiating table” while it faced threats from Washington, it said, “and will never take a single step back from strengthening our nuclear might”.

The UN Security Council unanimously adopted on Saturday a US-led resolution, which bans mineral and seafood exports from North Korea worth more than $1bn.

China, a close ally of North Korea, also voted in favour of the sanctions.

The US and its regional allies, South Korea and Japan, have been alarmed in the wake of the test-launch of two Intercontinental Ballistic Missiles (ICBMs) last month, which are believed to be capable of striking anywhere in the mainland US.

There, North Korea on Sunday dismissed offers of talks from South Korea during a rare exchange between the two rivals’ foreign ministers, according to Seoul’s state-funded Yonhap news agency.

In the brief encounter, Kang urged Ri to accept Seoul’s offers of military talks to lower tensions on the divided peninsula, and for discussions on a new round of reunions for divided families.

“Given the current situation in which the South collaborates with the US to heap pressure on the North, such proposals lacked sincerity,” an unnamed South Korean foreign ministry official has quoted Ri as saying in response.

Kang reiterated “the South’s sincerity” and repeated a call for Pyongyang to come forward for talks, the official told Yonhap.

Al Jazeera’s Kathy Novak, reporting from Seoul, said: “South Korea wants to say with the recent moves that the dialogue offer is on the table, but they won’t be bullied and will impose more sanctions on North Korea in case of ballistic missile tests.”

Al Jazeera’s Jamela Alindogan, reporting from Manila, said that the cooperation of China to put pressure on North Korea might signal a shift in approach and policy of Pyongyang.

“However, it remains to be seen whether the latest developments will produce concrete results or not,” she said.

News of the brief encounter between the Koreas came as Moon Jae-In, South Korea’s president, and his US counterpart, Donald Trump, agreed to apply maximum pressure on North Korea.

During a phone call Moon told Trump that South Korea “cannot let another war to break out” on the peninsula after the 1950-53 Korean War that sealed the division of two Koreas, the presidential Blue House said in a statement.

Even a conventional conflict on the peninsula could cost a million dead or wounded within months, estimates say.

The encounter of the foreign ministers was the first time cabinet-level officials from the two Koreas had met since Moon, who urges engagement with North Korea as well as sanctions to bring it to the negotiating table, took power in May.

Moon’s policy that is open to engagement with North Korea is different from his two conservative predecessors, who tended to reject anything less than strict enforcement of sanctions and punishment of Pyongyang.

Meanwhile, the US, Japan and South Korea have welcomed the tough new UN sanctions, as China cautiously approved of them but reiterated a call for dialogue.

North Korea has been conducting nuclear and ballistic missile tests despite warnings issued and sanctions imposed by the international community. 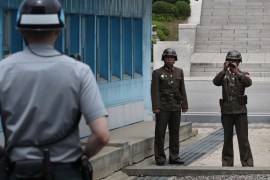 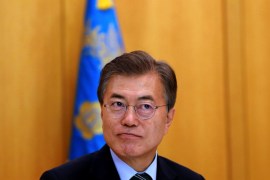