The clashes followed an attack by BDK members on Kinshasa’s main prison and demonstrations by other members against Democratic Republic of Congo (DRC) President Joseph Kabila in Kinshasa, Matadi and the southwestern city of Boma, witnesses and security sources said.

A series of large-scale prison breaks across the DRC in the past few months has aggravated insecurity since Kabila refused to step down after his mandate expired in December.

Assailants wearing red headbands characteristic of BDK members staged the attack on the high-security Makala prison but did not make it past the front door, a witness inside the prison told Reuters news agency.

“We woke up to the deafening noise of gunshots,” said the witness, who asked to remain anonymous for fear of repercussions. He said he had seen police and soldiers gather several bodies outside the prison walls.

BDK leader and self-styled prophet Ne Muanda Nsemi escaped from prison in May and had called on his supporters to rise up this Monday against Kabila, whom Nsemi accuses of being Rwandan – seen as a slur and quite commonly used by the president’s opponents.

The group aims to revive the pre-colonial Kongo kingdom, which thrived for centuries around the mouth of the Congo River.

BDK demonstrators on Monday held signs that read, “Rwanda for Rwandans. Congo for Congolese. Get out, Kanambe,” using another slur to refer to Kabila.

The BDK movement is one of just many sources of opposition of Kabila that threaten to plunge the vast, mineral-rich central country into chaos. The opposition has called for nationwide strikes on Tuesday and Wednesday.

Fearing further unrest, Congolese authorities on Monday ordered internet capacity be slowed down so that it cannot be used to transmit images via social media.

“In order to prevent the exchange of abusive images via social media by your subscribers, I ask you to … take technical measures to restrict to a minimum the capacity to transmit images,” post and telecoms chief regulator Oscar Manikunda Musata said in a signed letter seen by Reuters.

Police spokesman Pierrot Mwanamputu said in a statement that 12 BDK assailants in Kinshasa, armed with calibre-12 rifles and bladed weapons, were killed by “stray bullets” fired by security forces to disperse them.

The attackers killed one policeman.

Two others were killed in the southwestern town of Matadi, where three police officers were also injured, he added.

READ MORE: The Atlantic to Kinshasa – A journey on the River Congo

A security source told Reuters two army officers had been killed in Kinshasa while the city’s police commissioner General Sylvano Kasongo told Reuters no one escaped from the prison.

Around 4,000 prisoners, including Nsemi, escaped from Makala in May during an attack by suspected BDK members.

The mounting unrest has led some of Kabila’s allies to call for a state of emergency.

More than 50 people were killed on Friday in the southeast in inter-ethnic clashes, part of rising violence by armed groups across the country.

Ruling on killing of UN experts

In a separate development, a military tribunal in Kananga, in the DRC’s troubled region of Kasai, gave an important procedural ruling on Monday in the case of two UN experts who were killed in March.

Michael Sharp, an American, and Zaida Catalan, a Swedish-Chilean dual national, were found murdered after they went to investigate violence in the region which began to flare in August 2016.

A UN specialist panel in New York said the attack was an ambush and did not rule out that members of the security forces may have been involved.

The tribunal, which is ruling in the case, gave the go-ahead for all parties to go to the scene of the crime.

The visit will take place on August 21, it said. 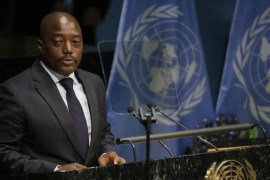 Arrests made as protesters march in different parts of the country demanding President Joseph Kabila to step down. 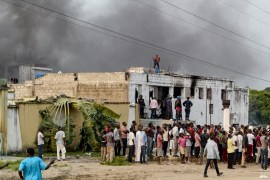 Separatist cult leader and about 50 other inmates freed after supporters attack prison in the capital Kinshasa.