Two people have been killed and at least eight others captured in an armed attack by “terrorists” on a Venezuelan military base, President Nicolas Maduro announced on state television.

A previous count by army chief General Jesus Suarez Chourio said that one died and one was gravely wounded in the attack on Sunday on the base in the northwestern city of Valencia, which the military said was quickly put down.

Maduro also said that 10 other men have escaped and authorities were hunting for them.

One of the attackers was badly wounded during the assault, army chief Chourio said.

The Venezuelan president said 20 men in all entered the Paramacay base shortly before 4am local time. He said soldiers assigned as night guards were caught by surprise and the intruders were able to work their way to the base’s weapons supply.

The president said troops battled with the intruders for about four hours.

The president alleges the attack was “paid for” by anti-government leaders based in Miami and Colombia.

Meanwhile, an opposition party official said that a local leader was shot dead at a protest near the military base. It is unclear, however, if Haydee Franco was referring to one of the two fatalities mentioned by Maduro.

Military officials said the rebels, whom they described as “terrorists,” were trying to steal weapons.

Earlier on Sunday, a small group of men dressed in military fatigues, some armed with assault rifles, released a video declaring an uprising in Carabobo state, where Valencia is located.

In the video, a man identifying himself as Captain Juan Caguaripano said that any unit refusing to go along with its call for rebellion would be declared a military target.

“We demand the immediate formation of a transition government,” Caguaripano said. He was flanked by about a dozen men in military uniforms.

“This is not a coup d’etat,” he said. “This is a civic and military action to re-establish constitutional order. But more than that, it is to save the country from total destruction.”

One witness in the area told the Reuters news agency of hearing gunshots before dawn.

Al Jazeera’s John Holman, reporting from Caracas, said a civil society group that monitors the military has raised questions about Caguaripano and the attack on Paramacay.

Citing Control Ciudadano, our correspondent said: “What’s strange about this man who speaks in the video, who says he’s a captain in the army, is that he was wanted by the government in 2014, also for trying to organise some sort of insurrection.

“So how is he free? And how is he once again doing the same?”

Venezuela has been rocked by a wave of anti-government protests in the past several months that have left more than 100 people dead.

The reported attack in Paramacay comes two days after government allies inaugurated a new legislative super body that the opposition and dozens of countries denounced as a power grab by President Nicolas Maduro.

In its first act on Saturday, the Constituent Assembly ordered the dismissal of the country’s attorney general, Luisa Ortega, a vocal government critic.

The opposition is struggling to regain its footing in the face of the government’s tactics and re-emergence of old, internal divisions. 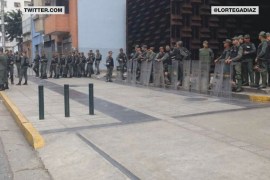 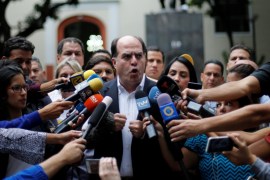