Venezuelan opposition leader Leopoldo Lopez was returned to house arrest on Saturday after being detained in military prison for four days, his wife Lilian Tintori said.

“They just moved Leopoldo home,” Tintori wrote on Twitter. “We continue with more conviction and strength for peace and freedom in Venezuela!”

Lopez, 46, was already under house arrest when he was picked up by Venezuelan intelligence services overnight Monday, one day after a vote to choose a powerful “Constituent Assembly” tasked with rewriting the Constitution.

He was first arrested in 2014 and released to home detention last month.

Another prominent dissident, 62-year-old Antonio Ledezma, was released back to house arrest Friday after being hauled away the same day as Lopez. He had already been in home detention since 2015.

Following their arrests, the Venezuelan Supreme Tribunal alleged that they had been planning to flee, either into hiding in the country or abroad.

News of Lopez came as the opposition said Venezuela’s institutions have been “taken hostage” by President Nicolas Maduro and his party after Luisa Ortega, the country’s chief prosecutor, was fired by the new super-assembly packed with Maduro allies.

“One hand, one political party” has taken total control through “an undemocratic mechanism that is utterly dictatorial,” the leader of the opposition-controlled legislature, Julio Borges, told reporters on Saturday.

“Do you know what they are trying to do? Hide the evidence of corruption and human rights violations in Venezuela,” Ortega told reporters. “I will continue to denounce and expose them.”

Ortega has been replaced by Ombudsman Tarek Williman Saab, who was recently sanctioned by the US for failing to protect protesters from abuses in his role as the nation’s top human rights official.

Maduro contends that the assembly is the solution for Venezuela’s political standoff and dire economy.

But the opposition, which boycotted last Sunday’s vote, views it as a way for Maduro to hold onto power.

Meanwhile on Saturday, the foreign ministers of Argentina, Paraguay, Uruguay and Brazil urged Maduro to dismantle the Constituent Assembly and immediately start a political transition.

“We are saying: Stop with this! Enough with the deaths, enough with the repression. It is not possible to inflict such torture to the people,” Aloysio Ferreira, Brazil’s foreign minister, told the South American countries at an emergency meeting in Sao Paulo, Brazil.

The countries indefinitely suspended Venezuela from the South American trading bloc Mercosur for its “rupture of the democratic order”.

Venezuela had been temporarily suspended in December. 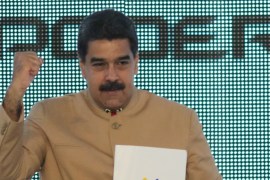 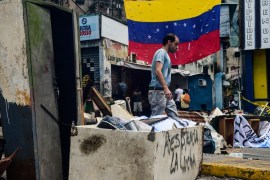