Venezuela’s controversial new assembly has voted to remove the country’s dissident attorney general, Luisa Ortega, after security forces surrounded the entrance to her office in Caracas.

Ortega told reporters she was attacked when she attempted to enter her headquarters and accused the government of attempting to hide evidence of wrongdoing.

“You didn’t see how they manhandled me, how they attacked me with shields,” she said.

“Do you know what they are trying to do? Hide the evidence of corruption and human rights violations in Venezuela. I will continue to denounce them and expose them.”

Earlier, she denounced what she called a military “siege” on Twitter, publishing photos showing about 30 national guardsmen in riot gear standing outside her headquarters.

Against this backdrop, foreign ministers from several South American countries declared that Venezuela was indefinitely suspended from the South American trading bloc Mercosur for its “rupture of the democratic order”.

Venezuela was temporarily suspended in December.

In a statement she signed as chief prosecutor, Ortega refused to recognise the Constituent Assembly’s decision and vowed to continue defending the rights of Venezuelans from Maduro’s “coup” against the constitution “with my last breath”.

Saab was recently sanctioned by the US for failing to protect protesters from abuses in his role as the nation’s top human rights official.

Al Jazeera’s John Holman, reporting from Caracas, described Ortega as a “thorn” in President Nicolas Maduro‘s side and said her removal from office was not the end of her troubles.

“Now her bank accounts are frozen. She’s not allowed to leave the country and she’s been charged by the Supreme Court for breach of her public duties,” he said.

Ortega had asked a local court to halt the inauguration of the 545-member Constitutional Assembly, citing allegations that the government manipulated the results of the vote that created it.

Her request was dismissed on procedural grounds and it was installed on Friday.

The new body supersedes Venezuela’s opposition-controlled National Assembly. It can rewrite the Constitution, rearrange state institutions and allow Maduro to rule by decree.

Members of the Constituent Assembly had announced they would fire Ortega and other opponents of Maduro the first chance they got.

Maduro himself said on Friday that “if we had an attorney general here that acted … all these violent protesters would already be in jail”.

After their meeting in Sao Paulo on Saturday, the foreign ministers of Argentina, Paraguay, Uruguay and Brazil urged Maduro to dismantle the Constituent Assembly and immediately start a political transition.

“We are saying: Stop with this! Enough with the deaths, enough with the repression. It is not possible to inflict such torture to the people,” Aloysio Ferreira, Brazil’s foreign minister, said.

Several countries have condemned the election of the Constituent Assembly, calling it a bid to extend Maduro’s rule indefinitely. His supporters say the move will pacify the country.

The opposition, meanwhile, is struggling to regain its footing in the face of the government’s tactics.

In a sign of its apparent demoralised state, only a few hundred demonstrators showed up for a Friday protest against the assembly, one of the smallest turnouts in months. 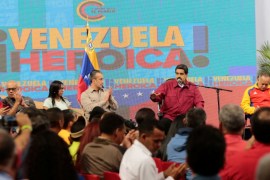 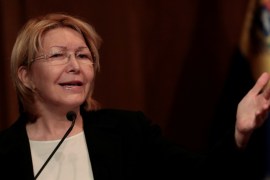