Buses carrying Syrian rebel fighters, their families, and refugees have arrived in opposition-held areas in Idlib and Hama provinces after an exchange deal allowed them to leave the Lebanese border town of Arsal.

On Wednesday, around 7,000 people, including members of Jabhat Fateh al-Sham, were escorted by the Lebanese Red Cross. They were received by the Syrian Red Crescent after crossing the border.

The agreement follows the capture of the border area by Hezbollah with support from Syrian warplanes and involves the release of Hezbollah fighters held by Jabhat Fateh al-Sham, which was previously known as al-Nusra Front.

Fighting flared up in July when Hezbollah launched an operation to capture the area from Syrian armed groups.

Security sources say that about 1,000 Jabhat Fateh al-Sham fighters are among those who left the area for Idlib aboard dozens of buses.

Al Jazeera’s Imtiaz Tyab, reporting from Beirut, said the events were a culmination of a very complex deal.

“The deal involved a number of phases, which included the exchange of the remains of the fighters on each side, and this very large evacuation and prisoner release,” he said.

However, in an interview to Al Jadeed, a Lebanon-based TV station seen as close to the government of Syrian President Bashar al-Assad, a Lebanese General Security official estimated the number of fighters to be much lower.

“What we know is 120 fighters,” Major-General Abbas Ibrahim said.

Arsal and its neighbouring areas are home to around 100,000 Syrian refugees, who have fled fighting between rebel and government forces.

The war began when government troops opened fire on pro-democracy protesters in early 2011 but quickly turned into an armed conflict involving dozens of armed groups, and later foreign forces.

Hezbollah entered the conflict in support of Syrian President Bashar al-Assad and has taken part in offensives on both sides of the border.

The country is currently divided between the Syrian government, the Islamic State of Iraq and the Levant (ISIL, also known as ISIS) group, rebel factions, and Kurdish fighters backed by US troops.

As well as support from Hezbollah and its Iranian backers, Assad has the support of Russian forces and Iraqi Shia fighters.

The conflict has resulted in one of the most severe refugee crises since World War II with nearly five million people fleeing the country since 2011, according to the UNHCR.

The war has claimed up to 470,000 lives, according to the Syrian Observatory for Human Rights, a UK-based campaign group that documents the death toll. 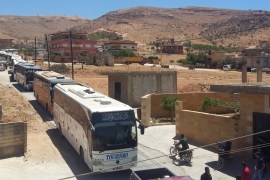 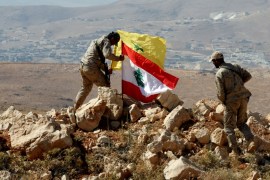