China has demanded that India pull back its troops from a contested region high in the Himalayas, warning New Delhi not “to push your luck” amid a festering border dispute.

According to Indian officials, about 300 soldiers from either side face each other about 150 metres apart on the Doklam plateau, an area also claimed by India’s ally Bhutan.

The standoff began in June when Chinese troops started building a road onto the plateau towards India’s border.

Bhutan sought help from India, which sent troops across the border from the northeastern state of Sikkim.

On Monday, Colonel Wu Qian, a Chinese defence ministry spokesman, said India must not underestimate Beijing’s determination to safeguard what it considers sovereign territory belonging to China in the Doklam plateau.

“Here is a wish to remind India, do not push your luck and cling to any fantasies.”

“If China unilaterally changes the status quo of the tri-junction, it becomes a matter of security concern for India,” Swaraj said in parliament last week.

Although the Doklam plateau is not part of Indian territory, India is sensitive to Chinese building activity in the region as it would give China access to the so-called Chicken’s Neck, a thin strip of land that connects India and its remote northeastern states.

India has called for a withdrawal of forces and a negotiated settlement to the standoff.

Wu, however, reiterated that the withdrawal of Indian border guards was a precondition to resolving the situation.

“Shaking a mountain is easy but shaking the People’s Liberation Army is hard,” he said.

“We strongly urge India to take practical steps to correct its mistake, cease provocations, and meet China halfway in jointly safeguarding the border region’s peace and tranquillity,” he said.

He added that the military had taken emergency measures in the region and would continue to increase focused deployments and drills.

The crisis is expected to be discussed when India’s National Security Adviser Ajit Doval visits Beijing this week for a security forum under the BRICS group of large developing nations that includes Brazil, Russia, India, China and South Africa.

China and India share a 3,500km frontier, large parts of which are disputed.

The two nuclear-armed powers fought a bloody border war in 1962. 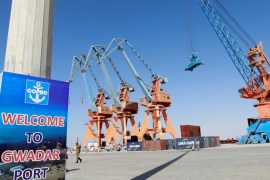 The $46bn CPEC project connecting Xinjiang in China to Gwadar in Pakistan has raised concerns in India.