Musharraf was charged with Bhutto’s 2007 assassination in 2013, but has been in self-imposed exile in Dubai ever since a travel ban was lifted three years later.

The official said he had “absconded”.

The court also acquitted five men who had been accused of being Taliban fighters involved in the conspiracy to murder Bhutto, the Muslim world’s first female prime minister, the official told AFP news agency.

However, it found two police officers guilty of “mishandling the crime scene”, the court official said, adding they had each been sentenced to 17 years imprisonment and fined 500,000 rupees ($4,700).

The verdicts are the first to be issued in the case, and come nearly 10 years after Bhutto was killed in a gun and suicide bomb attack during an election rally in Rawalpindi.

Musharraf’s government blamed the assassination on Pakistan Taliban chief Baitullah Mehsud, who denied any involvement. He was killed in a US drone attack in 2009.

In 2010, a UN report accused Musharraf’s government of failing to give Bhutto adequate protection and said her death could have been prevented. 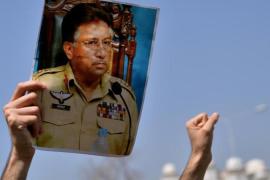 Country divided as ’emotional’ Musharraf is charged with high treason. 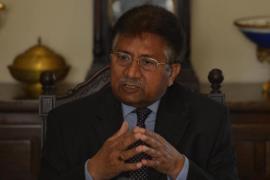 Pakistan’s former military leader gives his first international interview since he was released from house arrest.