US President Donald Trump pressured the Mexican president to stop voicing opposition in public to his plan to have Mexico pay for a border wall, according to transcripts of phone calls published on Thursday.

Trump also told the Australian prime minister that a refugee deal struck between Australia and the United States prior to him taking office is “a stupid deal” that will make him “look terrible”.

The Washington Post published on Thursday transcripts of calls Trump made to Mexico’s Enrique Pena Nieto and Australia’s Malcolm Turnbull just days after he took office on January 20.

The substance of the calls had previously been reported, but Al Jazeera’s White House correspondent, Kimberly Halkett, said the transcripts reveal “rare insights into a different style of diplomacy than we have typically seen from previous presidents”.

‘You can’t say that’

In a January 27 call with Pena Nieto, Trump pressured the Mexican president to avoid saying in public that Mexico would not fund the planned border wall.

The proposed wall, a Trump campaign promise aimed at preventing illegal immigration to the US, is a bone of contention between Mexico and Washington.

Pena Nieto has repeatedly rejected Trump’s promise that Mexico will end up paying billions of dollars for its construction.

Trump told the Mexican leader in the call that “if you are going to say that Mexico is not going to pay for the wall, then I do not want to meet with you guys any more because I cannot live with that”, according to the transcript.

“You cannot say that to the press,” Trump said.

REPORTER’S NOTEBOOK: Can Donald Trump build a wall? And what else?

The White House has said the US government would pay for the wall initially to get the project off the ground but that Mexico will eventually reimburse it for the work.

In their phone conversation, Trump said both leaders were “in a little bit of a political bind” due to Trump’s campaign pledge to build the wall and have Mexico foot the bill.

“I have to have Mexico pay for the wall – I have to. I have been talking about it for a two-year period,” Trump said.

He suggested that the two men avoid the issue of paying for the wall when asked.

“They are going to say, ‘Who is going to pay for the wall, Mr President?’ to both of us, and we should both say, ‘We will work it out,'” Trump said.

Pena Nieto said he understood Trump’s position on how to refer to paying for the border wall and suggested seeking “a creative way to jump over this obstacle”, but reiterated that Mexico “cannot pay for that wall”.

Towards the end of their conversation, Trump responded effusively to a comment by Pena Nieto about the Mexican leader’s wish for a constructive relationship with the US.

“Your words are so beautiful. Those are beautiful words, and I do not think I can speak that beautifully, okay?” Trump said.

“I want you to be so popular that your people will call for a constitutional amendment in Mexico so that you can run again for another six years,” he said. By law, Mexican presidents can only serve one six-year term.

Both the White House and Mexico‘s foreign ministry did not have any immediate comment on Thursday about the release of the call transcripts.

‘Most unpleasant call all day’

Speaking to Australia’s Turnbull on January 28, Trump became irritated that the US was expected to honour an agreement made by his predecessor, Barack Obama, to accept as many as 1,250 refugees held in offshore prisons.

Trump said that would make him look bad given his campaign promises to reduce the number of refugees entering the US, according to the transcript.

“Boy, that will make us look awfully bad,” Trump says. “Here I am calling for a ban where I am not letting anybody in, and we take 2,000 people. Really it looks like 2,000 people that Australia does not want, and I do not blame you by the way, but the United States has become like a dumping ground,” Trump said.

“This is going to kill me. I am the world’s greatest person that does not want to let people into the country,” Trump said.

Turnbull countered, saying that “this is a big deal, and I think we should respect deals”.

The US president also told Turnbull that their conversation was the most difficult he had held that day, after speaking to Russian President Vladimir Putin, German Chancellor Angela Merkel and Japanese Prime Minister Shinzo Abe among others.

“I have had it. I have been making these calls all day, and this is the most unpleasant call all day,” Trump said. “Putin was a pleasant call. This is ridiculous.” 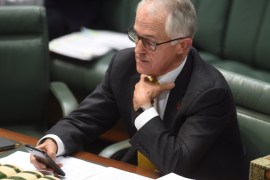