Brazil’s lower house of congress voted on Wednesday to reject a corruption charge against President Michel Temer for allegedly taking bribes, saving him from facing a possible Supreme Court trial that could have ousted him from office.

At least 172 of the 513 members of the lower Chamber of Deputies had voted by late Wednesday against putting Temer on trial for allegedly orchestrating a scheme to line his own pockets with millions of dollars in illicit payments.

Temer won enough ballots to keep the opposition from gaining the two-thirds of the vote – or 342 votes – required to move the corruption case forward to the top court. A final tally was expected later on Wednesday night.

OPINION: Why is neoliberalism back in Latin America?

The strong show of support for Temer raised the prospects that he can now move ahead with controversial economic reforms in an economy emerging from recession.

Al Jazeera’s Daniel Schweimler, reporting from Brasilia, said Temer was always confident he would win the vote and had pledged more than $1bn of government funds for projects to various members of congress to ensure their vote.

“So he is no doubt is breathing a sigh of relief – for now at least,” said Schweimler.

But Temer is widely expected to face more corruption charges in the coming weeks, which would again put his presidency at stake.

‘Tired of so much suspicion’

Opposition politicians, carrying briefcases stuffed with fake money, chanted “Out with Temer!” on the house floor at the start of the day-long tumultuous session.

Temer’s main coalition ally, the Brazilian Social Democracy Party (PSDB), which seeks to win the presidential election next year, was split on whether to back Temer, whose economic policies it shares, or distance itself from his corruption-plagued government.

PSDB leader Ricardo Tripoli, calling for the charge to be approved, said Temer must be investigated, “not because we want to oust the president, but because Brazilians are tired of so much suspicion surrounding their politicians”.

Temer and his legal team have denied any wrongdoing.

Brazil’s stocks and currency rose earlier on Wednesday after a cloture vote signalled a victory for Temer and robust support for his reform agenda to cut spending and restore confidence in government accounts.

‘This drama is by no means over’

Armando Castelar, a professor of economics at the Federal University of Rio de Janeiro, told Al Jazeera that, although Temer’s approval ratings are very low, the vote showed his strength in congress. He added that Temer would now be able to return to his economic agenda.

Castelar said Temer’s pledge not to run for re-election in 2019 was a further strength.

“This usually facilitates support in congress because parties don’t see him as a future opponent if things go well. So this may work for the better for the economy. Obviously it’s not a desirable situation for a political perspective,” he said.

“But Brazil is in such a difficult position – with the public sector accounts and low growth – that maybe for this moment it’s not bad news,” said Castelar.

Al Jazeera’s Daniel Schweimler said that, while Temer says he wants to get on with running the country, the so-called “Car Wash” corruption investigation in which he and many others were implicated is still ongoing.

“And [Temer] will no doubt be back in congress at some stage defending himself against new charges of corruption – although he has said he’s innocent and he wants to continue governing. So this drama is by no means over.” 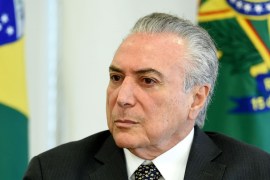 Brazil congress to vote on whether to remove president

Brazil’s President Michel Temer denies allegations he accepted bribes as he faces a battle for his political survival. 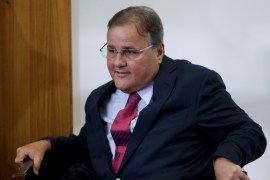 Geddel Vieira Lima is the second ex-cabinet official from Temer’s administration to be arrested in less than a month.