Accompanied by heavily-armed police, Yehuda Glick, of Netanyahu’s Likud party, and Shuli Mualem-Rafaeli, of the Jewish Home, went to the site early on Tuesday as part of a one-day trial period.

Palestinian leaders condemned the move, with Nabil Abu Rudeineh, spokesperson for the Palestinian presidency, saying that the Israeli government was responsible for the provocations at the compound.

Masud Ganaim, a Palestinian member of the Israeli parliament, the Knesset, also said allowing right-wing politicians into the complex had “the goal of provoking Arab and Muslim sentiment and inflaming the situation”.

READ MORE: What comes after Abbas and Netanyahu?

Netanyahu instructed police in October 2015 to bar members of the Knesset, or MKs, from visiting the site in the Old City of Israeli-annexed East Jerusalem, in a move meant to help calm unrest that erupted in part over Palestinian fears that Israel was planning to assert further control over the compound.

The site is the holiest site in Judaism and the third-holiest in Islam, and it is central to the Israeli-Palestinian conflict.

Only Muslim prayer is currently allowed at the site, which is administered by a Jordanian-controlled Islamic authority.

Last week, reports emerged that MKs would be allowed to visit the site, known to Jews as the Temple Mount, in a one-day trial on Tuesday.

Israel is now considering reinstating visits for all legislators.

Palestinians accuse the Israeli government of attempting to change the “status quo” of the area by allowing Jewish prayer and asserting Israeli control over the holy compound, which Israel denies.

READ MORE: ‘We won’ – Al-Aqsa Mosque reopened to all Palestinians

In July, Palestinians protested night and day for nearly two weeks, refusing to pray inside the compound after Israel installed metal detectors at its entrances. They held prayers in the streets and just outside the gates to the Old City.

The new regulations came after an attack on July 14 by three Palestinian citizens of Israel, who killed two Israeli policemen in the Old City of Jerusalem. The three men were then chased inside the compound before they were shot and killed.

In 13 days of protests, Israeli forces wounded more than 1,000 Palestinians during clashes, according to the Palestinian Red Crescent.

On July 26, Israeli authorities removed the surveillance equipment and other obstacles from the gates leading to the holy site.

Al Jazeera’s Harry Fawcett, reporting from the occupied East Jerusalem, said officials of the Islamic Waqf authority that administers the holy site called Tuesday’s visit by the MKs a political act by Netanyahu, “one which is provocative, especially in the run-up to the Muslim Eid al-Adha festival“.

Fawcett added: “We wait to see how more widely how the Palestinian population here in East Jerusalem interprets this [visit], just weeks after they were on the streets protesting in such vehement style”.

‘No more uprooting of settlements’

Meanwhile, in remarks that infuriated the Palestinians, Netanyahu said he will never uproot any West Bank settlement.

Speaking during a ceremony in the settlement of Barkan on Monday night, Netanyahu said that Israel has returned to the land of the Jewish forefathers “for good”, adding that there “will be no more uprooting of settlements in the Land of Israel”.

The Palestinians seek all of the West Bank as part of a future independent state. Under international law, all settlements are illegal.

Abu Rudeineh, the Palestinian president’s spokesman, denounced Netanyahu’s statement and called on the United States “to deal with these provocations”.

Speaking alongside Palestinian President Mahmoud Abbas in the Turkish capital, Ankara, Erdogan said: “To find a solution and provide peace is not only in Palestinians’ favour but also that of Israel.”

He also described the two-state solution as the “historical responsibility of the international community to the Palestinian people”, and that recent tensions over restrictions at the al-Aqsa Mosque compound in Jerusalem would not favour anyone.

“As Turkey, we always back efforts to accelerate the peace process,” Erdogan added, going on to say that the process needed to acknowledge and protect Palestinian rights.

“We do not want the holy city of Jerusalem, which we have served for four centuries, to dominate the news with blood, tears and conflict,” Erdogan said. 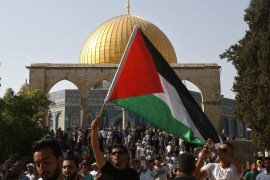 Reported easing of ban prompts social media calls for Palestinians to also be present at the Jerusalem site next week. 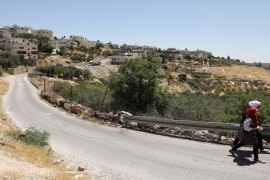 Palestinian girl dies after being struck by settler car

Relatives doubt Israel police will properly probe killing of eight-year-old, whose family home was about to be seized.