US President Donald Trump has signed an executive order that revives a controversial programme giving local police easier access to military gear such as grenade launchers, high-calibre weapons and armoured vehicles, despite widespread concerns over the militarisation of the force.

Trump signed the executive order on Monday, undoing a directive by his predecessor, Barack Obama, that limited police agencies’ access to camouflage uniforms, riot shields and other items.

Obama had issued the order in the wake of the fatal shooting of unarmed black teenager Michael Brown by Darren Wilson, a white police officer in August 2014.

Brown’s death sparked national protests over the police’s use of deadly force, especially against black men, and when demonstrators rallied in the city against alleged police brutality they were met by a police force dressed in full riot gear and pointing sniper rifles at them.

A review by the Justice Department found that deploying police with armoured vehicles, tear gas and dogs, had “inflamed tensions and created fear among demonstrators”.

“We’ve seen how militarised gear can sometimes give people a feeling like there’s an occupying force as opposed to a force that’s part of the community that’s protecting them and serving them,” Obama said at the time.

“It can alienate and intimidate local residents and send the wrong message.”

Attorney General Jeff Sessions said on Monday that the restrictions placed on police departments “went too far”, adding that the Trump administration would “not allow criminal activity, violence and lawlessness to become the new normal”.

Speaking to police officers at a conference in Nashville, Tennessee, Sessions said the equipment was needed because “violent crime is back with a vengeance”, citing a murder rate that had surged nearly 11 percent nationwide in 2015.

Al Jazeera’s Kimberley Halkett, reporting from Washington, DC, said while there were some regional cases such as Chicago, St. Louis and Baltimore where that was the case, violent crime had been dropping by as much as 50 percent over the past 25 years.

“There is a lot of concern among civil rights groups over how this will be received by minority communities,” she said.

According to a 2015 Gallup poll, 61 percent of white people reported having a great deal of confidence in the police while only 45 and 30 percent of black people and members of the Latino community shared that sentiment.

“Considering the distrust of police actions, many people will no longer view the police as partners in combatting crime – but as occupiers,” our correspondent added.

Groups across the political spectrum expressed concern over the lifting of the ban, with the NAACP Legal Defense Fund (LDF) saying it was “exceptionally dangerous and irresponsible” and encouraged confrontations with officers.

“Just a few summers ago, our nation watched as Ferguson raised the spectre of increased police militarisation. The law enforcement response there and in too many places across the country demonstrated how perilous, especially for Black and Brown communities, a militarised police force can be,” the LDF said.

“The president’s decision to make this change in the wake of the tragedy in Charlottesville and against a backdrop of frayed relations between police and communities of colour further reflects this administration’s now open effort to escalate racial tensions in our country,” it added.

Tensions are high after a white supremacist mowed down a crowd of anti-racists on August 12 in Charlottesville, Virginia, killing anti-fascist protester Heather Heyer and injuring dozens.

“We have an epidemic in the United States of police using excessive force, particularly against people of colour, with injuries and deaths mounting,” Bennett said.

“It defies logic to arm the police with weapons of war … instead of practical, effective ways to protect and serve everyone.” 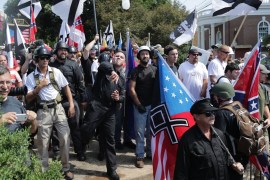 UN issues rare warning over ‘alarming’ racism in US

After Trump’s response to Charlottesville, UN says US leadership must ‘unequivocally’ condemn racist speech and crimes. 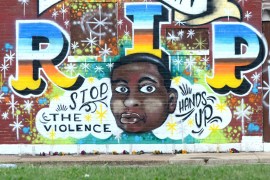