The main problem is that the storm is incredibly slow moving.

Normally a storm like this would be steered by winds high up in the atmosphere, but the winds are weak, so there’s nothing to push it out of the way.

Harvey has remained within about 150km of the spot where it first made landfall, and it’s only moving at 5km per hour. Most people can jog faster than that.

What is the forecast?

With the steering winds being so weak, so far it’s been difficult to predict exactly where this storm will move and when.

However, the different forecasts, generated by the computers of the main meteorological agencies, are now in more of an agreement as to the future track of this storm.

This boosts confidence of its future path.

Harvey is expected to move in an anti-clockwise motion, leaving the Texas coast on Monday, then moving northwards up the coast and coming on shore again in eastern Texas.

Finally on Wednesday the storm is expected to clear away towards the north, into Arkansas. However, rain is still forecast for Houston.

The sea is the energy source of a tropical storm such as Harvey. As it moves over the waters of the Gulf it could slightly strengthen, but the winds are not expected to become significantly more powerful.
However, the rain will continue to be a problem.

The storm is a large system and even when the centre of it is over the sea, it will continue to fire torrential rain towards the land.

Houston, where some of the worst of the flooding has been seen, was not hit by the centre of the storm. It was the outer bands of the storm which triggered the relentless rain and the unprecedented flooding.

So far 776 millimetres of rain has fallen on the city and there could be over 600mm more still to come as the storm cycles round to move close to the city.

Will the flood drain readily?

With more rain forecast, there are major concerns that the water already on the ground is unable to drain away.

Being a modern city, there is a lot of tarmac and cement, which obviously doesn’t help drainage, but even where there is soil, it has a large clay content which prevents drainage.

Even water which has made it into the many bayous and rivers which crisscross the city cannot simply flow into the sea because the winds are still blowing the waters of the Gulf of Mexico towards the coast.

Sea water is being driven directly against the flow of flood water, creating an impasse.

It is not only Houston which will be hit by further flooding. A significant section of Texas and southwestern Louisiana could be in for another 500mm of rain.

As the storm continues to churn across the state, more rain will fall and more people will feel its force.

In a region where less than a quarter of people have flood insurance, many residents are set to lose everything. 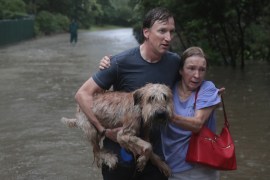 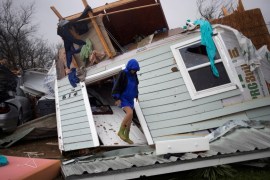 At least two killed and a flood emergency declared in Houston as Harvey brings torrential rain along Texas coast. 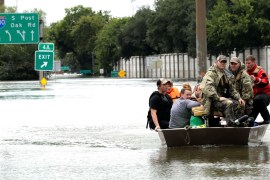 US emergency chief says Harvey brought ‘devastating disaster’ in Houston and could be the worst to hit Texas.